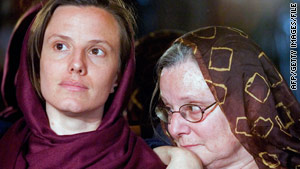 (CNN) -- Sarah Shourd, one of three American hikers held in Iran for more than a year, will be released Saturday, Iranian officials said Thursday.

An official at Iran's Ministry of Culture and Islamic Guidance said earlier Thursday that one of the three would be freed this weekend, after the end of the Islamic holy month of Ramadan, without specifying which one. But Bak Sahraei, a representative for the Iranian mission to the United Nations, told CNN that Shourd was designated for release "very soon."

The Culture Ministry official said one of Iran's vice presidents will be present when the hiker is released at 9 a.m. Saturday.

Shourd, along with Shane Bauer and Josh Fattal, were detained July 31, 2009, after they allegedly strayed across an unmarked border into Iran while hiking in Iraq's Kurdistan region. Tehran has said the three hikers were spies, and Iran's intelligence minister has hinted the country may consider releasing them in exchange for the release of Iranian prisoners, according to state news outlets.

Masoud Shafii, the Iranian lawyer who represents the hikers, said he has put in a formal request for the trio's release within the past two weeks. Shafii said he told prosecutors that a year had passed since their arrests and the government had not shown any just cause for their imprisonment, and that Shourd has a medical condition that requires proper care.

After the news first broke Thursday, the mothers of all three said they had seen the reports and were "urgently seeking further information."

Video: Hikers' moms on their visit to Iran
RELATED TOPICS

"We hope and pray that the reports are true and that this signals the end of all three of our children's long and difficult detention," Cindy Hickey, Nora Shourd and Laura Fattal said in a joint statement. "Shane, Sarah and Josh are all innocent and we continue to call for their immediate release, so that they can return home together and be reunited with our families."

Upon release, Shourd would be leaving her fiance behind in prison. The families announced in spring that Shourd and Bauer got engaged in prison and plan to be married when they're both released.

In Washington, State Department spokesman Mark Toner told reporters, "We don't know, frankly, what Iran is contemplating at this point." He said the United States was making inquiries through the Swiss government, which represents U.S. interests in Tehran.

"Obviously, if this turns out to be true, this is terrific news," Toner said. "The hikers' release is long overdue, and I would just stress that we hope that it's all three hikers."