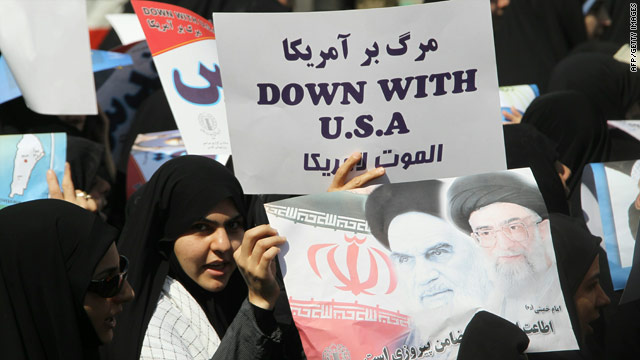 (CNN) -- Protesters gathered in Iran on Friday for a demonstration to observe an annual holiday that marks the country's solidarity with Palestinians and calls for the end of Israel occupation.

One notable absence was Iranian opposition leader Mehdi Karrubi, whose security force feared for his safety and advised him to stay away, his son said.

About 50 people surrounded Karrubi's home Friday morning -- shooting paint balls and shouting chants against him and the opposition movement, the son said.

The site said the head of his security team was in a coma after being beaten as he tried to talk with a group of attackers who broke into the apartment complex Thursday.

His son told CNN the attackers fired shots, set small fires in the courtyard and lobby and vandalized parts of the building.

But around the country Friday, Quds Day demonstrations continued.

Large crowds chanted "Death to Israel" and "Death to America" in Palestine Square near Tehran University.

In the city of Kerman, a man with a loudspeaker chanted the slogans, with the crowd repeating after him.

Some were carrying Iranian flags and banners supporting Palestinians while others waved cartoon caricatures of U.S. President Barack Obama.

"These talks are dead. There is no reason to hold talks," he said.

"The fate of Palestine will be determined on the ground in Palestine, not in Washington and not in London," he added.

"We know how hard it is for them to resist," he said.

As he spoke, the crowd chanted, "Death to Israel."

Security forces lined the streets near Haft-e-Tir Square in central Tehran, and at least two people were detained. There were no reports of opposition clashes.

Clashes between security forces and protesters were reported around the university during Iranian President Mahmoud Ahmadinejad's speech last year.

On Thursday, Mohammad Taghi Karrubi told CNN that attackers had repeatedly come to his father's house because he had expressed his desire to take part in Friday's events.

He said he was inside his father's fifth-floor apartment when about 20 Basij broke into the courtyard Thursday. Several of the men threatened to kill his father, he said.

"When we asked the police to come to help...nobody came," he said.

Asked who was responsible, he said, "They are in the name of the Basij, but in my opinion they are hooligans. The government tries to use these hooligans against the opposition and against the people."

Several members of his father's security team were injured -- but not shot -- and were taken to a hospital, he said.

Asked if he and his father planned to attend Quds Day events on Friday, he said, "Do you think we'll still be alive tomorrow morning to take part?"

International Quds Day, or "Jerusalem day" is observed on the last Friday of Ramadan.

The government sponsored holiday was established in August 1979 by the late founder Ayatollah Ruhollah Khomeini shortly after the Islamic Revolution.

Khomeini called for all Muslims worldwide to participate in the events that denounce Israel and show support for the Palestinian cause.

"The day for those nations suffering under the pressure of American oppression and oppression by other powers to confront the superpowers; it is the day when the oppressed should arm themselves against the oppressors," he said in a speech in August of 1979.

Anti-Zionist demonstrations, parades, and seminars are held in some Muslim and Arab countries, but are especially large in Iran.

The Quds Day "appears to pave the way for the collapse of Israel and its allies, namely the U.S. and Britain," Brig. Gen. Masoud Jazayeri, the deputy head of Iran's armed forces joint chiefs of staff, told the Islamic Republic News Agency on Thursday.