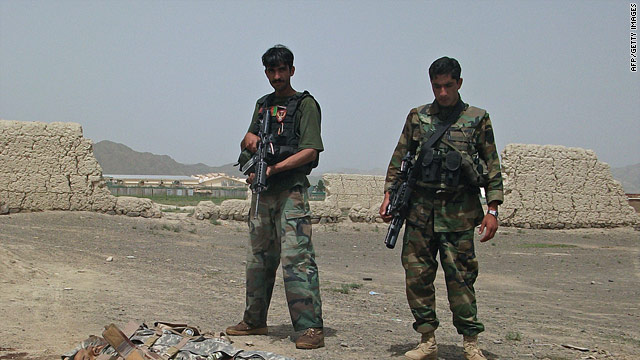 The Haqqani network is a militant group with ties to al Qaeda.

Thirteen of the insurgents killed were wearing suicide vests, ISAF said, adding that Afghan and coalition soldiers followed up on intelligence tips and later captured a commander involved in planning the attacks.

"The insurgents' attempts to attack ISAF or Afghan government facilities were defeated again. The insurgent leadership who direct these ill-conceived attacks far from the actual battlefield knows their low-level fighters have no chance of success against these targets," Brig. Gen. Josef Blotz, an ISAF spokesman, said in a statement.

Separately on Sunday, ISAF said Afghan and international forces captured a senior Taliban commander in Logar province. Zia Ul-Haq is accused of helping foreign fighters and suicide bombers get into the capital, Kabul.

He was captured along with a sub-commander and another insurgent on Wednesday, ISAF said in a statement.

Chapman is the same base where a suicide bomber killed seven CIA officers late last year.