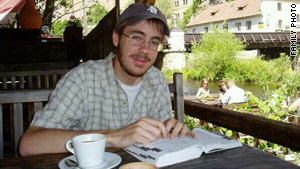 Jake Hess said he rejected offers of American help because "the U.S. is an imperialist country."
STORY HIGHLIGHTS
RELATED TOPICS

At a court appearance Sunday, a prosecutor charged Hess with "taking orders from a terrorist organization" and called for his immediate deportation from Turkey, witnesses said.

Turkish officialdom regularly refers to the Kurdistan Workers' Party, or PKK, as a terrorist organization.

U.S. diplomats say Hess rejected their offer of assistance after he was taken into custody.

"We have spoken with him on the phone regarding his situation, and he specifically asked us not to share any information on his case," said Deborah Guido, a spokeswoman for the U.S. Embassy in Ankara. "He did not sign a privacy waiver. We can take an oral privacy waiver [by phone], and it was his choice. He did not want to be helped."

Asked why he rejected the American offer, Hess answered that "the U.S. is an imperialist country, and I disagree with U.S. policy towards Turkey and the Kurds. It would be hypocritical to support an American journalist who is persecuted for human rights journalism while at the same time supporting the Turkish policy of criminalizing Kurdish political activists."

Hess spoke with CNN by telephone on Monday from the detention center in Diyarbakir. He said he was initially detained by a Turkish anti-terrorist police unit on August 11.

"I am being targeted for criticizing the Turkish government and criticizing human rights abuses," he said. "The prosecutor accused me of waging a smear campaign against the Turkish republic."

Turkish officials in Diyarbakir and in the capital, Ankara, have declined to comment on Hess' case.

The 25-year old American said he hoped his detention would focus attention on the arrest of hundreds of ethnic Kurds in recent years, including elected mayors from Turkey's Peace and Democracy Party (BDP), a Kurdish nationalist political party.

"Some of these people have been in custody since April 2009 without trial," he said. "It's an absolutely unbelievable and outrageous injustice."

Hess is a native of New Hampshire who studied at Suffolk University and Brown University.

He said he previously volunteered as an activist with several Kurdish activist organizations in Europe and in Turkey. After moving to Diyarbakir more than a year ago, Hess volunteered with the Human Rights Association (IHD), a local non-governmental organization that has reported extensively on abuses committed against ethnic Kurds during Turkey's quarter-century long war with PKK guerrillas. More than 30,000 people, most of them ethnic Kurds, have been killed in the conflict.

Hess had also begun writing as a freelance journalist with the online Inter Press Service news agency, filing a report this month from Iraqi Kurdistan about periodic Turkish and Iranian artillery bombardment of Kurdish villages on the Iraqi side of the border.

Hess denied charges that he was an active accomplice to the PKK, which is formally classified by the Turkish and U.S. governments as a terrorist organization.

"The only relationship I had with the PKK was maybe two months ago, when I went to northern Iraq and interviewed a PKK spokesman there," Hess said.

"We call for Hess's immediate release. Neither placing him in pre-trial detention nor deporting him are appropriate solutions," said the Paris-based group Reporters Without Borders in a statement.

"Kurdish media and journalists who cover the consequences of Turkish policy towards the Kurds are too often the target of harassment, which the authorities clumsily try to justify as a necessary part of their efforts to combat terrorism."

Turkish police also briefly detained several other residents of Diyarbakir in connection with Hess's case, including Yilmaz Akinci, a respected Kurdish journalist who has worked with Reuters, National Public Radio, ABC News and CNN, and who is now a producer with Al Jazeera's Arabic language service.

Akinci said Hess approached him in June, looking for work.

"He had been applying for jobs everywhere," Akinci said. "He came to me and said, 'I want to be a journalist.' "

Turkish police detained Akinci at his family's home in a predawn raid Sunday. He said he later learned that security forces had secretly photographed him during his earlier meeting with Hess.

Akinci said he was released later Sunday, after authorities learned that he was a journalist.