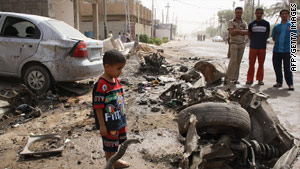 Iraqis gather at the site of a blast in Falluja on Sunday.
STORY HIGHLIGHTS
RELATED TOPICS

A U.S. soldier also died Saturday in the Babil province of central Iraq, the military said Sunday. The name of the soldier has not been released, pending notification of family and release by the Department of Defense. The incident is under investigation, the military said. No other details were released.

Thirty-six people also died Saturday in three explosions in a busy market in central Basra, police said. At least 100 people were wounded, but police said it remains unclear whether the blasts were the work of terrorists or the result of an electrical spark or malfunction which caused a large power generator to explode.

Overall, violence in Iraq has dropped drastically over the past two years compared to the height of the sectarian war in 2005 and 2007, but such attacks continue.

The country is also at a critical period as U.S. forces continue drawing down troops to reach 50 thousand by the end of August ahead of the Obama Administration's deadline to end America's combat missions by September 1.

Iraqi statistics show a spike in violence in July, which is disputed by the U.S. military, who maintain that the levels are staying stable.

Some senior Iraqi officials as well as civilians have expressed concerns about the U.S. drawdown against the backdrop of a political vacuum -- Iraqi politicians have failed to form a government for five months after the inconclusive March elections.

In response to a question about readiness of the Iraqi security forces and concerns about a return to increased violence expressed by Iraqis, Gen. Raymond Odierno, the top U.S. commander in Iraq, told CNN that, "Security has continued to move forward, a little bit better depending on which area you are at -- so they have done it."

He continued, "What I would tell them is that we are still here, we are not leaving completely and we're still very committed to Iraq. We are still going to have 50,000 troops on the ground for a significant period of time to help them build that confidence between them and the Iraqi security forces.