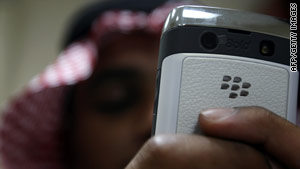 A Saudi man uses his Blackberry in the capital city of Riyadh on August 1.
STORY HIGHLIGHTS

The mandate applies to businesses and individuals "because the manufacturer of the devices couldn't meet the regulatory requirements of the commission and it is not in accordance with the regulations and conditions of licenses issued to service providers, at its present state," it said.

It did not elaborate.

Research In Motion, the Canadian company that produces the BlackBerry, did not immediately respond to a request for reaction.

Tuesday's decision comes a day after the United Arab Emirates defended its decision to suspend BlackBerry internet service, with its ambassador in Washington arguing the United States requires the same "regulatory compliance" for national security reasons.

"In fact, the UAE is asking for exactly the same regulatory compliance -- and with the same principles of judicial and regulatory oversight -- that BlackBerry grants the U.S. and other governments and nothing more," the ambassador said. "Importantly, the UAE requires the same compliance as the U.S. for the very same reasons: to protect national security and to assist in law enforcement."

The state-run Emirates News Agency reported Sunday that the UAE would suspend BlackBerry's data service as of October 11. The announcement said certain services "allow users to act without any legal accountability, causing judicial, social and national security concerns for the UAE."

U.S. State Department spokesman P.J. Crowley called the move "a dangerous precedent." He told reporters Monday that the United States supports the free flow of information, "And we will be clarifying with the UAE their reasons for making this announcement."

"It's about what we think is an important element of democracy, human rights and freedom of information and the flow of information in the 21st century," Crowley said. He said the United States understood the emirates' concerns "about how information can be used by those who wish to attack the UAE or others," but added, "We think this is not necessarily the best way to accomplish it."

On Sunday, Telecom expert Abdel Rahman al Mazi told CNN that BlackBerry is considered to have the most secure operating system, "but on that same wavelength, you have to think that some of the activities that go on within the BlackBerry user community could need to be monitored by some government agencies for security reasons."

Research in Motion has yet to provide any official response to CNN about the issue. But the UAE has said it has tried to reach a solution to the issue with the company.

"It is regrettable that after several years of discussions, BlackBerry is still not compliant with UAE regulatory requirements even as it complies with similar policies in other countries," Al Otaiba said.