By Mick B. Krever, CNN 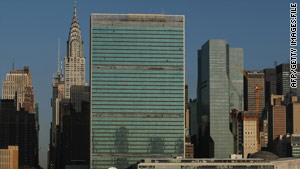 Of the 45 names removed by the U.N. panel, eight belonged to people who had died.
STORY HIGHLIGHTS
RELATED TOPICS

United Nations (CNN) -- A Security Council sanctions committee removed 45 names Monday from a blacklist of people and organizations affiliated with al Qaeda or the Taliban.

The move comes after an 18-month comprehensive review, the first of its kind since the list was created in 1999. Those on the blacklist are subject to travel restrictions and asset freezes.

Twenty-four of the removed entries were individuals, and 21 were organizations. The 45 names amounted to just under 10 percent of the entries on the list, bringing the total remaining to 443.

"The purpose of the list is not punitive but preventive," Austrian Ambassador Thomas Mayr-Harting, who chairs the al Qaeda and Taliban Sanctions Committee, said at a news conference Monday. "The committee decided that there was no longer a need to keep these entries on the list."

Indeed, Mayr-Harting said that more than half of the entries had not been reviewed at all since 2001. Eight of the 45 de-listed entries were people who have died. Thirty people still on the list are believed to be dead. They cannot be removed, however, until their deaths can be verified and the state of their assets is determined -- not an easy task when dealing with people who are often in hiding and living in the treacherous mountains of the Afghanistan-Pakistan border.

One of the biggest challenges the committee faces is information gathering. Members are assisted by a "monitoring team," but the committee itself has no investigative powers. Rather, it relies on the cooperation of member countries and their national intelligence agencies.

Richard Barrett, who chairs the monitoring team, said that he was fully satisfied with the assistance he receives from member countries. He added that more than 120 countries, or 75 percent of U.N. membership, were consulted to gather information on those on the blacklist.

He admitted that more investigative power would be helpful, but said, "I can't imagine that we're going to go down to the Afghanistan-Pakistan border area and sniff around there."

Barrett said that the removal was an important symbolic step.

He cited both Afghan President Hamid Karzai and the Taliban as saying that the review process was an important step toward reconciliation. Karzai believes that the removal of people like Abdul Hakim Mujahid Muhammed, who served as the envoy to the United Nations during the Taliban regime and was one of the 45 de-listed on Monday, will help bridge the divide between the Afghan government and moderate Taliban members.

Monday's announcement is part of a process of creating what Security Council members hope to be a more fair and transparent sanctions process. Last year a resolution was passed that called for the appointment of an ombudsperson to hear direct appeals from people or organizations who believe they are unfairly on the list. That office was opened last month.

There will now also be annual reviews of people who have been on the list for three or more years and names for which there is not enough information to make a positive identification. Every six months the committee will review the cases of people presumed dead.