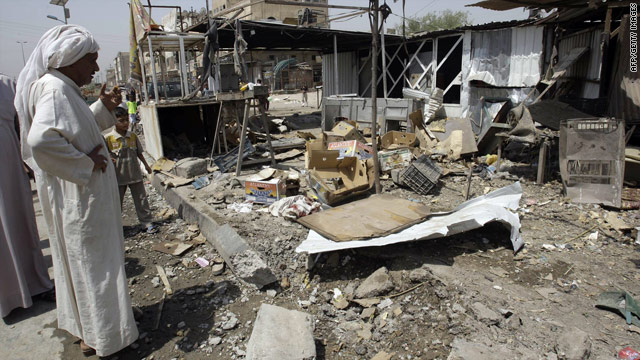 Iraqis look at the debris from a bomb that killed five people inside a restaurant in a Shiite area of Baghdad on July 28.
STORY HIGHLIGHTS
RELATED TOPICS

Baghdad, Iraq (CNN) -- The U.S. military Sunday disputed Iraqi figures that indicated July was the deadliest month for civilians there since May 2008, saying the actual numbers are less than half what leaked internal Iraqi government figures show.

The U.S. command in Baghdad "refutes that 535 people were killed in Iraq during the month of July," the military said in a statement. It put the total number of people killed by "enemy action" at 222, including 161 civilians -- the ninth-lowest civilian casualty count since January 2008, according to the U.S. military.

Iraqi data leaked to the press Saturday reported 396 civilians, 50 Iraqi soldiers and 89 police officers were killed in July. Iraqi officials also said 100 so-called "terrorists" were killed, and 955 others were detained.

The dispute over the numbers comes against the backdrop of the ongoing U.S. drawdown, with the aim of having troop levels at or below 50,000 by September 1. The U.S. military believes that the Iraqi security forces can maintain the current levels of relative stability, but that sentiment is not shared by many Iraqis.

In a recent interview with CNN, former Iraqi Prime Minister Ayad Allawi -- a top contender for the prime minister's position again -- said he is concerned and that "the security is declining ... (and) that's why we need really good resolutions, we need to expedite the formation of a government and we need to create an understanding in the region, and we need the help of the United States to facilitate all of these issues through its good offices in Iraq and elsewhere in the region."

Sunday was not the first time U.S. officials claimed different violence numbers than what has been reported in Iraq.

During the last Iraqi elections, the U.S. military claimed that no acts of violence had taken place, while many media outlets working in Iraq reported dozens dead. A subsequent U.S. investigation found that the media reports were accurate.

In general, the U.S. military has been more critical of the reporters covering the conflict in Iraq, reporters say.