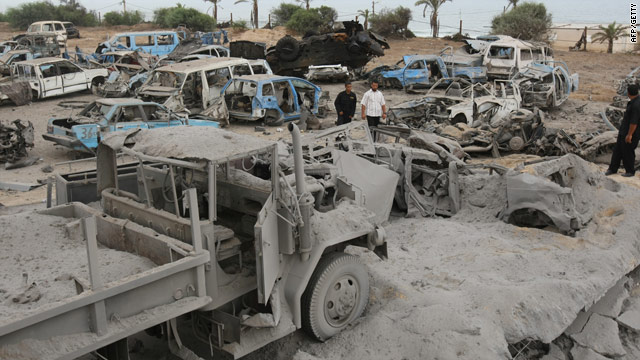 The strike in central Gaza killed Saed Al Bitran, who was responsible for manufacturing weapons, according to Hamas forces.

Israel Defense Forces said the attack on a weapons-manufacturing site in central Gaza was part of a series of strikes that began late Friday, in retaliation for a rocket assault on Ashkelon earlier in the day.

A second rocket was fired from Gaza on Saturday night, slamming into the Israeli town of Sderot. There were significant damages, including damages to a university building, but no casualties were reported, according to the IDF.

An IDF spokesperson said Saturday that no Israeli response had been initiated yet for the second rocket attack.

The Israeli air strikes also targeted two other locations in Gaza: a Hamas "terror-activity site" in the north and a weapons-smuggling tunnel in Rafah, Israeli forces said.

The first Israeli air strike occurred around 11:30 p.m. Friday (4:30 p.m. ET). It targeted a runway near the compound of the late Palestinian leader Yasser Arafat, which is now occupied by Hamas, according to a CNN stringer at the scene.

The coastal Israeli city of Ashkelon was hit by a rocket fired by Palestinian militants in Gaza early Friday, causing minor damage but no injuries, an Israel Defense Forces spokeswoman said.

Ashkelon, with a population of approximately 125,000 residents, is about 6 miles (10 kilometers) from the Israel-Gaza border and has been the target of many rockets originating from Gaza -- some wounding residents.

The violence occurred after a glimmer of progress in the Mideast peace process on Thursday. That's when the Arab League gave the Palestinian Authority the green light for direct talks with Israel.

The move prompted Israeli Prime Minister Benjamin Netanyahu to say his country is ready for the face-to-face talks as well.

But the Arab leaders made it clear it is now up to Palestinian Authority President Mahmoud Abbas whether to engage in such negotiations.

Abbas is from the Fatah political movement. Fatah is the rival of the more hard-line Hamas, which runs Gaza.

The Arab League decision comes after intense Western pressures and more than a-year-and-a-half of a stalled peace process.

Israel and the Palestinians have been meeting indirectly with George Mitchell, the Obama administration's point man for the Middle East, shuttling between the sides.

Abbas has been reluctant to agree to direct talks in part because of continued Israeli settlement activity.