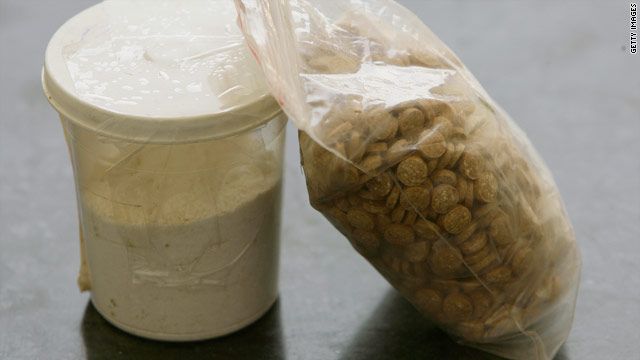 Captagon pills and a cup of cocaine displayed by Lebanese anti-narcotics forces in June 2010.
STORY HIGHLIGHTS

London, England (CNN) -- The Middle East leads the world in amphetamine seizures but governments in the region have been slow to admit there is a drug abuse problem, hindering efforts to fight it.

All intoxicants, including alcohol, are forbidden by Islam, yet "immense volumes" of illegal amphetamines are being seized in the Middle East, particularly Saudi Arabia, according to Matthew Nice, a drugs expert with the U.N. Office on Drugs and Crime (UNODC).

"I can't emphasize enough the size of this," said Nice, whose specialist area is amphetamine-type-stimulants. "Fifteen metric tons is absolutely huge, it's absolutely phenomenal.

"We're really struggling because the information base is so limited. It's definitely just the tip of the iceberg," he told CNN.

Experts working in the region say abuse of all kinds of drugs is a growing problem.

Professor Jallal Toufiq, founder of the Middle East and North Africa Harm Reduction Association told CNN: "There is a worsening of the drug situation in the whole region, with no exceptions.

"We have to be very careful about this because there are no trend studies, but if you collect indirect indicators, I can tell you with certainty there's an increase in drug abuse in the region.

"We can show it in terms of treatment demand, social expression, related crime, HIV and Hepatitis C increasing in these countries -- all these kinds of indirect indicators."

But he added that a lack of research and data collection on the ground make it hard to identify the scale of the problem.

For many countries there's a lack of political willingness because people just don't want to deal with this.
--Professor Jallal Toufiq
RELATED TOPICS

"In the Middle East and North Africa region there's a huge void in terms of data and information," he said. "For many countries there's a lack of political willingness because people just don't want to deal with this."

The kinds of drugs being abused varies across the region.

Use of Cannabis, commonly known as marijuana, is widespread, while Libya and Bahrain in particular have large numbers of heroin users, according to Toufiq.

Lebanon, with its lively nightlife and clubbing scene, has a higher incidence of designer-drug use, for example ecstasy, he said.

But the Middle East particularly stands out when it comes to seizures of amphetamine.

"We've been watching [the seizures] increase, but it started exploding around 2006 when we started seeing huge jumps in the drug that's uniquely known in [the Middle East] as Captagon."

According to the UNODC, Captagon is the brand name for a pharmaceutical drug developed in the 1960s to treat Attention-Deficit Hyperactivity Disorder (ADHD). Production was discontinued in the 1980s.

Pharmaceutical Captagon contained a synthetic stimulant called fenetylline. These days, narcotic manufacturers in south-eastern Europe are taking advantage of Captagon's reputation as a stimulant and producing counterfeit Captagon tablets, stamped with the Captagon logo, but containing amphetamine -- a controlled substance -- as well as other chemicals, including caffeine.

Although there is little data on drug use in Saudi Arabia, Dr. Ali Al-Haqwi of King Saud Bin Abdul-Aziz University for Health Sciences, in Riyadh, has researched attitudes to drugs in the country.

"When I ask people the most commonly abused drug in our community they say alcohol, followed by amphetamines," he told CNN. "Peer pressure is a very significant factor encouraging people to get involved."

Toufiq said governments in the region were now waking up to the extent of the drug problem. "They were in denial for years, but things are changing because of social expression," he said.

"There's no more censorship of what's going on in the societies in the region. It's coming out that there's a problem and it's perceived and seen now, so you can't hide it anymore."

But Toufiq told CNN that although there is a new political willingness to tackle the drug problem, years of neglect means a huge lack of trained personnel in the field, and a focus on targeting traffickers rather than reducing demand.

"You have very highly qualified people in supply reduction, in military and customs, but not in demand reduction or the medical approach side," he said.

"There's a very poor response in the field of treatment. There are some initiatives, but there is nothing at all in the field of prevention. Prevention in the Middle East and North Africa region is a catastrophe."