Israel to limit use of white phosphorus in conflicts 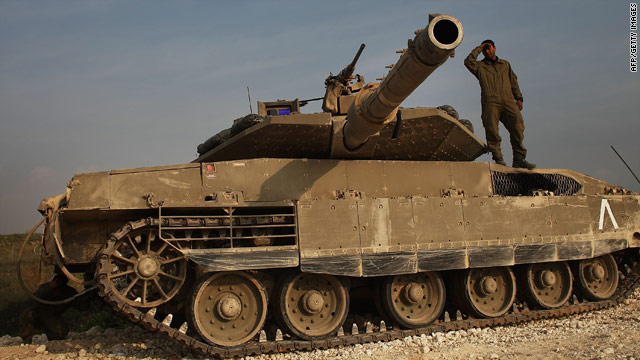 An Israeli soldier stands on top of a tank on January 17, 2009, along the Gaza-Israeli border.
STORY HIGHLIGHTS

(CNN) -- Israel pledged to limit the use of munitions containing white phosphorus and make greater efforts to protect civilians during conflicts, in a report this week to the United Nations.

The Israeli military was roundly criticized for firing white phosphorus shells over densely populated areas during the Gaza offensive that began in late 2008.

White phosphorus ignites and burns, creating white smoke when it is exposed to oxygen. Militaries use it as a smoke screen to protect troops during combat.

If it comes in contact with skin, white phosphorus creates an intense and persistent burn.

In making the changes, Israel said it had done nothing wrong.

"The use of smoke-screening munitions containing phosphorus during the Gaza operation ... was consistent with Israel's obligations under the Law of Armed Conflict," Israel said in the report.

Yet, as a result of "the lessons learned" in the aftermath of the Gaza offensive, the report said the Israeli military "is in the process of establishing permanent restrictions on the use of munitions containing white phosphorus in urban areas."

In a report entitled "Rain of Fire: Israel's Unlawful Use of White Phosphorus in Gaza" released last year, Human Rights Watch said Israel's firing of white phosphorus shells over densely populated areas during the Gaza offensive "was indiscriminate and is evidence of war crimes."

"In Gaza, the Israeli military didn't just use white phosphorus in open areas as a screen for its troops," said Fred Abrahams, a senior emergencies researcher for Human Rights Watch.

"It fired white phosphorus repeatedly over densely populated areas, even when its troops weren't in the area and safer smoke shells were available. As a result, civilians needlessly suffered and died."

The offensive, called Operation Cast Lead, was launched December 27, 2008 and ended January 17, 2009 with a ceasefire. Of the 1,453 people estimated killed in the conflict, 1,440 were Palestinian, including 431 children and 114 women, a U.N. report said. The 13 Israelis killed included three civilians and six soldiers killed by Hamas, and four soldiers killed by friendly fire, it said.