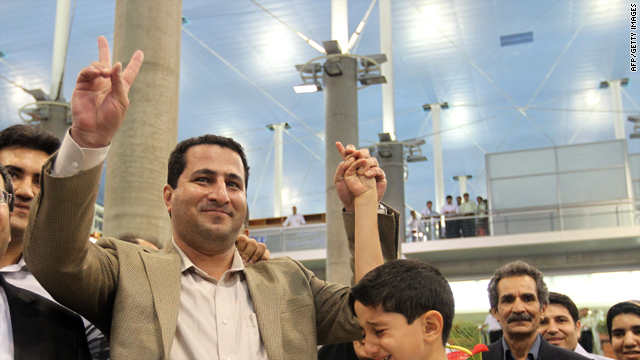 Fars cited an anonymous source who said Shahram Amiri's stay in the United States was a plan by Iranian intelligence that worked to perfection.

"This was an intelligence battle between America's CIA and us that was orchestrated and managed by Iran," the source was quoted as saying. "In planning this battle we saw a variety of intelligence goals and, with God's will, we reached all of our goals without our rival having gained any real victory."

Fars reported that Amiri provided the license plates of two CIA-owned vehicles as proof that he had infiltrated the spy agency. The plate numbers and the vehicle descriptions were published in the report.

There was no immediate response Wednesday night from the CIA to the Fars report.

The Fars report did not say what specific intelligence Amiri had provided about the CIA.

The report came a day after a government-linked Iranian film studio announced plans to make a movie about Amiri, who Iranian officials say was kidnapped by U.S. agents.

Amiri received a hero's welcome when he returned to Iran last week.

U.S. officials say he defected to the United States, and one official said Amiri received approximately $5 million for providing the U.S. government with "valuable, original information" on Iran's nuclear program.

Upon his return to Iran, Amiri, a researcher from Tehran's Malek Ashtar University, repeated his assertion that he had been kidnapped.

"I was abducted in Medina ... Then I was transferred to an unknown location in Saudi Arabia," Amiri told Iran's government-run Press TV. "They injected anesthetic drugs into me. They took me to the United States on a military plane.

"During my stay in the first two months, I was subjected to heavy psychological and mental tortures by CIA interrogators," he said. "Other kinds of pressure, too. They told me if I don't cooperate with them, they will hand me over to Israel and there are hidden prisons in Israel and there will be no trace of you any more."