Israel plans to have anti-missile system operational in 4 months 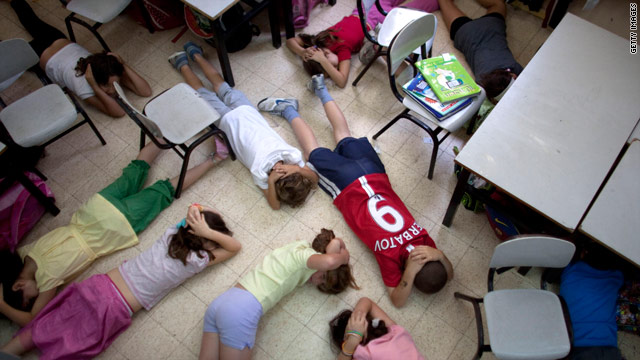 School children in Tel Aviv take cover during a nationwide drill in May to prepare the public for an emergency situation.
STORY HIGHLIGHTS
RELATED TOPICS

Video released by the ministry shows the interception of Grad and Qassam-like rockets, similar to those launched into Israel from Gaza in recent years and from Lebanon during the second Lebanon war of 2006.

Israel has considered rockets and missiles the main threat to its security since it withdrew its troops from southern Lebanon in 2000 and from Gaza in 2005.

"This is an important landmark for the security system and the security industries," Defense Minister Ehud Barak said in a written statement. "We will work to station the systems on the ground as soon as possible."

"The importance of the new system is major," concurred Ron Ben Yishai, national security and defense commentator for Yediot Aharonot newspaper and its website, known as Ynet.

"The IDF can easily identify and target heavy missiles before being launched because of the time required to prepare them, whereas short-range rockets can easily be hidden behind any bush or house in southern Lebanon," he said. "It is the lighter -- up to 70 kilometers range -- rockets that pose the serious nuisance to the Israeli population."

According to an Israeli defense ministry spokesman, the cost of developing and manufacturing the first two batteries was approximately $218 million. The cost of each additional battery is estimated at $13 million and rises to $21 million with the addition of radars and missiles.

He said he believes the advantages of the system justify the cost. "Each intercepting missile costs the IDF $50,000, yet the price should not be compared to the cost of the cheap Qassam but rather to the cost of the damages it causes both in human lives and in property. When examined this way, (the) equation is clear."

The funds proposed by the White House are expected to pay for up to nine more Iron Dome batteries. Two senior administration officials said the $205 million would be in addition to the $3 billion the United States spends each year to support Israel's defense.

One senior administration official said a U.S. team traveled last fall to Israel to see work on Iron Dome, and concluded that it was "a system that made sense."

Another senior administration official said the funding is part of an ongoing partnership between the United States and Israel to promote steps "we can jointly take to improve Israel's security." Israel's short-range rocket-defense system is "one of the security measures we've been talking (about) with them over time," the official added.

The Obama administration is helping Israel enhance its security systems, in part, to address Israeli fears that the establishment of a Palestinian state would create a safe launching pad for rocket attacks.

The batteries "can be transferred anywhere within Israel within a matter of hours," the defense ministry said.