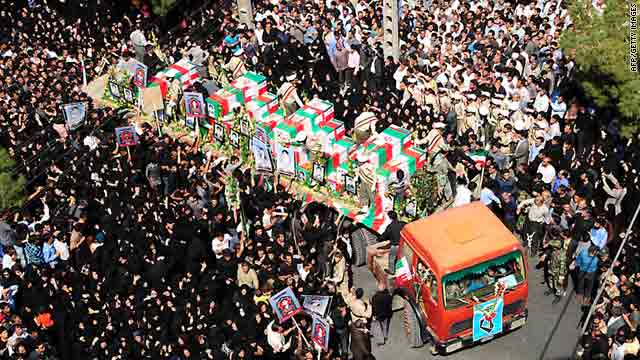 Iranian mourners on Saturday attend the mass funeral of those killed in twin suicide bombings in Zahedan.
STORY HIGHLIGHTS

(CNN) -- The bodies of 27 people killed in a pair of suicide bombings in the southeastern Iranian city of Zahedan were laid to rest Saturday, Iran's official news agency reported.

Tens of thousands of mourners descended on Zahedan to grieve, according to the Islamic Republic News Agency (IRNA).

An Iranian extremist group claimed responsibility for Thursday's bombings that killed at least 27 people and wounded dozens more. The announcement Friday was made on the official website of Jundallah, also known as the People's Resistance Movement of Iran.

"This operation is in response to the continuous crimes committed by the Iranian regime in Baluchistan," the statement said. "These two men sacrificed their souls to humiliate the regime and have proved that our misery will only end with Jihad and by scandalizing the criminals."

The claim came as top Iranian officials implicated the United States, Israel and parts of Europe in the attack, according to Iranian media.

"The U.S. cannot make up any excuses in this incident," said Iranian parliament speaker Ali Larijani on Friday, according to state-run Press TV.

Yadollah Javani, the head of the Revolutionary Guards Corps' political bureau, said terrorist groups under the auspices of the United States, Israel and some Western countries were involved, according to the semiofficial Fars news agency.

Video: Group says it set off bombs near mosque

Forty people "who tried to create insecurity" in the city in the aftermath of the bombings were arrested, said Maj. Gen. Ahmadreza Radan, deputy commander of security forces, Press-TV reported. No other details were available on the nature of the arrests

Health Minister Marzieh Vahid Dastjerdi said the death toll from the bombings reached 27 on Friday, according to IRNA. He said 270 were injured and 11 were in critical condition.

Zahedan is the capital of Sistan-Balochistan province, which borders Pakistan.

In London, England, Foreign Office Minister Alistair Burt said Britain "strongly condemns" the attack and said he was "horrified" by it.

"The United States extends its sympathy to the families and loved ones of those injured and killed," she said in a statement. "We also call for the perpetrators of this horrific attack to be held accountable for their actions."

Still, the Friday prayer leader of Tehran blamed the United States for the bombings.

Hezbollah, the Lebanese militant group backed by Iran, condemned the attack, saying it was "part of the arrogant campaign against the Islamic Republic of Iran, by some organizations and terrorist groups that have been raised by the hands of Western intelligence."

In October, in the same province, a suicide bomber blew himself up as participants headed to a conference between Shiite and Sunni Muslim groups in the city of Sarbaz.

At least 29 were killed in that bombing, including five senior officers of the Revolutionary Guard Corps. Jundallah also claimed responsibility for that attack.

In the past, the Shiite government in Tehran has accused Jundallah of fomenting unrest in the province. Iran has alleged that the United States and Saudi Arabia are funding the group. Jundallah says it is fighting for the rights of Sunni Muslims in the country.