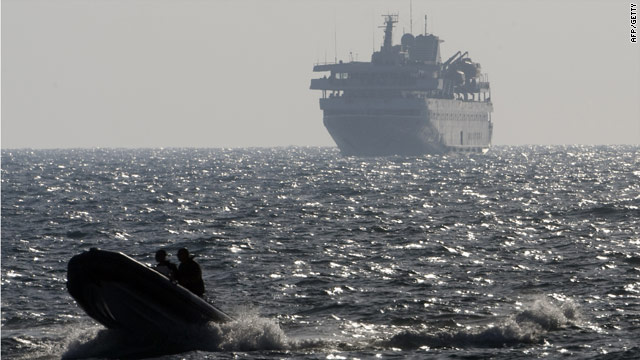 A speed boat escorts Turkish ship Mavi Marmara with Israeli troops on board near Ashdod, Israel, on May 31.
STORY HIGHLIGHTS

Jerusalem (CNN) -- Israeli navy commando soldiers who boarded a Gaza-bound aid flotilla on May 31, resulting in violence between troops and activists that left nine Turks dead, "operated properly, with professionalism, bravery and resourcefulness" and "exhibited correct decision making," according to an Israeli army review of the incident released Monday.

"The use of live fire was justified and the entire operation is estimable," the statement said.

The review was conducted by a team of experts, and their conclusions were presented Monday, the Israel Defense Forces said in a statement.

"The IDF is confident enough to critically examine itself and improve based on the conclusions," Ashkenazi said. While no failures or negligence were found, "nonetheless, an examination as thorough as this brings up mistakes which must be corrected for future incidents."

"Not all possible intelligence-gathering methods were fully implemented" during the flotilla operation, the experts found, and naval and Israeli defense intelligence had insufficient coordination. However, it was uncertain that even "an optimal intelligence effort" would have resulted in a complete intelligence picture, the statement said.

"The team also pointed out that the anticipated level of violence used against the forces was underestimated," and no plans were formulated in the event of "more dangerous scenarios," according to the IDF.

Israel has maintained its troops used force on the activists after they were attacked by those on board one boat in the flotilla, the Mavi Marmara. Soldiers were attacked with knives, metal poles and other objects, Israeli officials have said. But passengers on board the boat insist they were fired upon without provocation.

The incident left a wide-ranging military and diplomatic alliance between the Jewish state and Turkey, its powerful regional ally, badly shaken and drew international outrage.

The Israeli Commission of Inquiry also is conducting an ongoing investigation into the incident and is not expected to complete it for some time.

Maj. Gen. Giora Eiland, who headed the army team of experts conducting the review, said in his summary the flotilla raid "should be viewed with perspective" and "the damage caused to Israel is not as severe as it seemed following the incident," the statement said.

"In this inquiry we found that there were some professional mistakes regarding both the intelligence and the decision-making process in some of the operational mistakes," Eiland said. "But also we did find some very positive findings, and one of them that should be emphasized is the very professional and courageous way that the Israeli commandos behaved on this ship."

The army review experts found that decision makers, on the day of the incident, were not presented with alternative courses of action other than "a full boarding of the flotilla."

"The team emphasized the fact that as far is currently known, no country in the world holds the ability to stop a vessel at sea in a non-hostile manner," the statement said, despite "unfounded and irresponsible" comments made after the incident took place.

But, the experts pointed out, alternatives other than boarding the flotilla might have been available, given enough advance preparation.

Media relations preparations in advance of the operation were satisfactory, the statement said, "However, the release of press statements and visual materials was delayed due to the need to maintain reliability, the obligation to notify the families of the critically injured soldiers and the long authorization process at the levels above the IDF Spokesperson Unit." Better coordination is needed between the defense forces, the Foreign Ministry and other foreign affairs institutions, the experts found.

And the presence of the Israeli navy commander during the operation "proved effective in terms of the decision making process, saving lives and more."

"We continue to send our soldiers every day, in the air, on land and at sea, to missions much more dangerous than this flotilla," Ashkenazi said. "... I wouldn't want commanders and soldiers to embark on missions much more complicated and dangerous, knowing that back on land, or past the border at home, there waits an investigation committee. Therefore, the centrality of the examination, its thoroughness and quality, are a central method in our military culture."