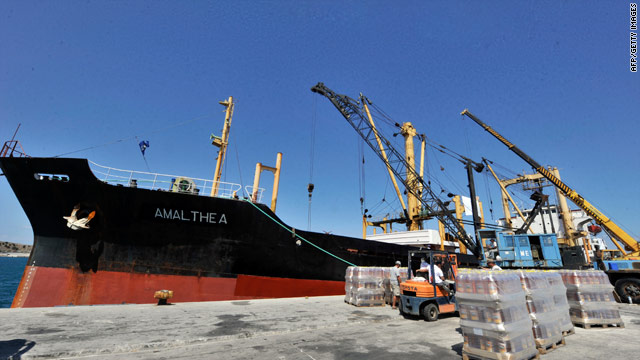 Workers load supplies on to a cargo ship at the Lavrio port, southeast of Athens, Greece, on Friday.
STORY HIGHLIGHTS
RELATED TOPICS

Jerusalem (CNN) -- An aid ship trying to break Israel's blockade of Gaza still plans to aim for the Palestinian territory, its organizer told CNN on Sunday, despite Israel's foreign ministry saying it would likely dock elsewhere.

But the activists on the boat will not resist if they are confronted by the Israeli military, said Youssef Sawani, the executive director of the Gadhafi Foundation, which is sending the boat.

The ship, launched by a charity headed by Libyan leader Moammar Gadhafi's son, set sail from Greece on Saturday carrying 2,000 tons of aid.

The Gadhafi Foundation refers to the ship as the Hope, although it appears to be registered formally as the MV Amalthea. It is Moldovan flagged and run by ACA Shipping, based in Greece.

"This is purely a humanitarian effort," he said, adding "The Israelis should seize this opportunity and allow the goods into Gaza."

Aside from the ship's crew, Sawani says nine others are on board: Six Libyans, one Moroccan and one person from Niger, all of whom work with the Gadhafi Foundation, plus a journalist from Al Jazeera, Sawani added.

Israel insists on controlling the entry of all goods into Gaza, which is run by the militant movement Hamas, because it says it must keep weapons out of the hands of people determined to attack it.

Barak said Israel would not allow the aid ship to dock in Gaza, but said it could unload goods elsewhere and Israel would allow them to enter the Palestinian territory by land after Israel inspects them.

"Goods can be transferred into Gaza through the port of Ashdod after they are inspected, but we will not allow the transfer of weapons or ammunition into Gaza," he said. "We recommend to the organizers of the flotilla to allow navy vessels to escort it to the port of Ashdod or sail directly to el-Arish" in Egypt.

Israeli commandos boarded a Turkish aid ship in May, resulting in violence between the troops and the activists on the ship that left nine Turks dead. The raid prompted international condemnation and threatened Israeli-Turkish relations.