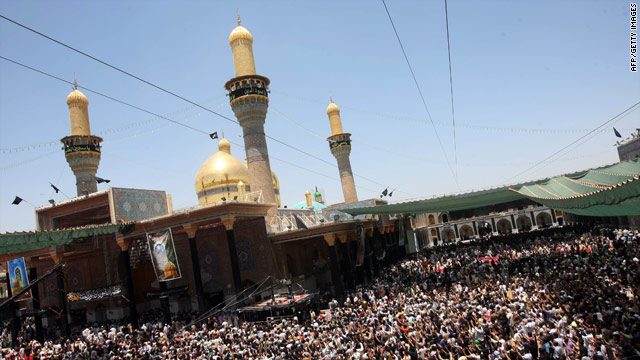 At least 17 people were killed and 107 others were injured in four roadside bombings attacks and a parked car bombing. In one of the strikes, two roadside bombs detonated in quick succession in eastern Baghdad's Palestine street near a restaurant.

The pilgrims were making their way home after gathering in the Baghdad neighborhood of Kadhimiya to mark the anniversary of the martyrdom of Imam Musa al-Kadhim, the official said.

Shiite pilgrims have long been the target of attacks by Sunni militants.

On Wednesday, strikes across the capital killed 49 people and wounded 244 others, most of them Shiite faithful.

The Iraqi military said that one of those attacks -- a suicide bombing in Adhamiya -- was conducted by a man disguised as a woman.

The capital had been under tight security for the pilgrimage, with many roads blocked and a ban on motorcycles and bicycles in place.

Security measures included using vehicles to transport pilgrims; thousands of deployed troops; security cameras in and around the shrine; aerial surveillance; and 500 personnel to combat the threat of female suicide bombers.

The Kadhimiya shrine is one of the holiest to Shiite Muslims around the world. The imam, a Shiite saint who died more than 1,200 years ago, is one of the 12 historic imams revered by Shiites.

The strikes have drawn international condemnation. Ad Melkert, the U.N. secretary-general's special representative in Iraq, deplored the "horrific crimes committed against defenseless civilians who were practicing their faith."

He said one step toward overcoming such instability is "the formation of a broadly based government" that "will be the most effective response in the face of insurgents who are aiming at destabilizing the country."

Melkert was making reference to solving the nation's political stalemate, where rival parties have yet to establish a government since the March 7 parliamentary elections.