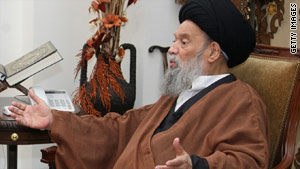 According to Hezbollah's website, Fadlallah will be buried Tuesday after the noon prayer at Beirut's al-Imamain al-Hassanein mosque in the capital's Shiite-dominated southern neighborhood.

Two days ago, a source in his office told CNN that Fadlallah had been hospitalized in Lebanon and was in "critical condition."

The hospitalization came after widespread rumors that the Shiite leader may not live much longer.

"He was at all times and circumstances the voice of moderation, calling for the unity of Lebanese in particular and the Muslims in general, rejecting -- and issuing religious edicts against -- strife, and calling for dialogue as a mean to resolve differences," Hariri said.

"He taught us to be a people of dialogue and to reject injustice and resist occupation," Hezbollah chief Hassan Nasrallah said in a statement Sunday.

Fadlallah was born in 1935 in the Shiite holy city of Najaf, Iraq, and completed his Quranic studies there, according to his website.

He has lived in Lebanon since the 1960s and became a spiritual leader of Hezbollah after it was founded in 1982 in response to an Israeli invasion.

In recent years, however, Fadlallah had become distanced from Hezbollah's Iran-influenced leadership.

"He stood with great courage and clarity supporting the resistance against the Zionist enemy and was a prominent advocate of Islamic unity fighting division and strife," Hezbollah said in a statement.

His views on various topics, including the role of women, are laid out on his website and are considered liberal for a Shiite cleric. But he never swayed from his criticism of Israel.

In a letter penned to President Barack Obama last year, Fadlallah said: "The size of support and cover-up provided by your country for the Zionist entity has become known. This entity was established on the land whose people were uprooted by the power of iron and fire. The subsequent American policies have contributed to the loss of the Palestinian cause, despite the ratification of many Security Council resolutions."

The United States considers Hezbollah, which has close ties to Iran and Syria, a terrorist organization. The Shiite group is a major provider of social services in Lebanon but also operates a militant wing.