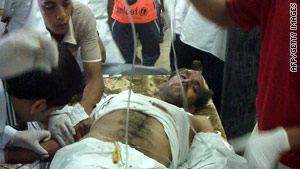 A man injured in the suicide bombing is wheeled into a hospital in Ramadi, Iraq, on Sunday.
STORY HIGHLIGHTS

The attack took place in Ramadi in Anbar province, about 100 km (62 miles) west of Baghdad.

Most of the wounded were provincial council guards, the interior ministry said.

Elsewhere Saturday, a car bomb in Kirkuk targeting the Sunni Endowment -- a government agency which oversees the sect's mosques and other sites -- wounded eight people, including the head of the agency, police said.