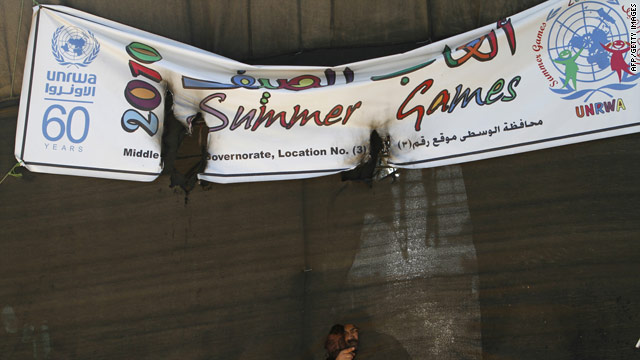 (CNN) -- A group of 25 armed and masked men attacked and set fire to a U.N.-sponsored summer camp in Gaza on Monday morning, the U.N. Relief and Works Agency said.

Witnesses told CNN that militants tied up the guards at the camp before setting it on fire.

"UNRWA will remain unbowed and intimidated by these attacks," UNRWA Gaza spokesman Chris Gunnes said. "They are an attack on the happiness and the well-being of all children attending our games and an attack on our values."

Monday's attack was the second case of a summer camp set in fire in Gaza this year. In May, masked militants burned another U.N.-sponsored summer camp hours before it was due to open.

Gunnes said the camp attacked Monday would be rebuilt immediately and the organization's summer games -- which provide 1,200 summer camps for more than 250,000 refugee children across Gaza -- will continue.

In a statement, John Ging, director of the agency's Gaza operations, described the attacks as "cowardly and despicable."

"This is another example of the growing levels of extremism in Gaza and further evidence, if that were needed, of the urgency to change the circumstances on the ground that are generating such extremism," he said.

Witnesses of both summer camp attacks said the militants involved were Muslim extremists who apparently object to boys and girls going to camp together.