Iran says plan to send ship to Gaza still on 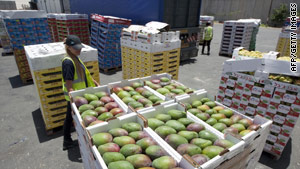 Mohammad Reza Sheibani, the deputy foreign minister in charge of Arab affairs, denied reports that Iran had abandoned the idea because of threats from Israel.

"The program to send (humanitarian) aid ships to Gaza by people's organizations and NGOs is still on the agenda of the Islamic Republic," he told reporters, according to a report in the semi-official Mehr news agency.

Tehran will coordinate with other nations who also plan to send aid and will decide on the departure time of the aid accordingly, Sheibani said.

He said that sending aid to Gaza by plane and through Egyptian borders is still on the agenda, adding: "This issue has been discussed with Egyptian authorities and we are waiting for them to let us know when our planes should carry the aid to Egypt."

On Thursday, the Islamic Republic News Agency quoted Hossein Sheikholeslam -- secretary-general of the International Conference for the Support of the Palestinian Intifada -- as saying: "The Iranian ship carrying humanitarian aid will not go to Gaza."

IRNA said that Sheikholeslam told reporters in the northern city of Rasht that the ship had originally been scheduled to depart for Gaza on Thursday, but that its departure was postponed until Sunday because of restrictions imposed by Israel.

He added that officials then decided instead to cancel the trip altogether, shipping the goods to Gaza by other means, IRNA said.

"The Zionist regime has sent a letter to the U.N. saying that the presence of Iranian and Lebanese ships in the Gaza area will be considered a declaration of war on that regime and it will react to it," he said, according to the news agency.

He added: "In order to deprive the Zionist regime of any excuse, the aid collected for the oppressed people of Gaza will be delivered to them by other means without mentioning the name of Iran."

In a posting on the Israel Defense Forces website, the chief of the general staff said Israel has "a natural right to inspect and to prevent the flow of weapons into the Gaza Strip."

"If anyone is bothered by the situation in the Gaza Strip and wants to transfer medical supplies there, they can respect our guidelines and go through to the Ashdod port," Lt. Gen. Gabi Ashkenazi said Tuesday, according to the IDF. "We will inspect them, and if we can we will transfer them in."

Ashkenazi added, "It is important that we maintain this right and we cannot let the Gaza Strip turn into an Iranian port."

Israeli Prime Minister Benjamin Netanyahu announced this month Israel's plans to ease its blockade of Gaza, a step commended by major powers and brushed off by Palestinian leaders.

Palestinian officials said the steps were an improvement but urged that the blockade be completely lifted and the Israeli siege ended.

Israel's announcement came three weeks after ships in Israel's naval blockade sparred on May 31 with a flotilla of aid ships heading to Gaza.

Israel's military stopped the flotilla, killing nine activists on one of the ships in the incident, which drew international condemnation.

Israel said its troops were attacked with knives, metal poles and other objects on one of the boats; the boat's passengers said they were fired upon without provocation.