A benchmark 100,000 Iraqi refugees to be resettled 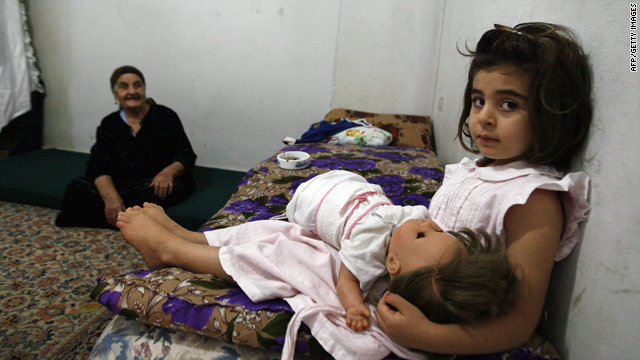 Years of war drove many Iraqis from their country. Members of this Christian refugee family were in Lebanon in 2008.
STORY HIGHLIGHTS
RELATED TOPICS

(CNN) -- They fled their homes, their violence-torn land, looking to begin life anew in places that guaranteed safety. But thousands of Iraqis found themselves stuck in squalid camps in neighboring Syria and Jordan.

But Friday, the United Nations refugee agency announced a milestone: 100,000 Iraqi refugees have been approved for resettlement.

Iraqis now make up one-fifth of the refugees from the Middle East helped by the United Nations.

"Many have been living in limbo for years," he said.

In a statement released ahead of Sunday's World Refugee Day, which Guterres is marking in Syria, he encouraged states to continue welcoming Iraq's refugees. Syria hosts about 45 percent of Iraqi refugees who have been approved for resettlement.

In all, the UNHCR estimates that 43.3 million people were forcibly displaced from their homes at the end of 2009, the highest number since the mid-1990s. Of these, 15.2 million were refugees.

Conflicts in Iraq and Afghanistan as well as in Somalia, the Democratic Republic of Congo and Sudan contributed to driving the numbers up, according to UNHCR.

Almost 2 million of the world's refugees are Iraqis, making them the second largest refugee population after Afghanistan's war displaced.

U.S. refugee agencies, which help resettle people once they arrive on American shores, have said in the past they feel a moral responsibility for Iraqis because of the 2003 invasion and subsequent U.S. involvement in Iraq. But it took America several years to open its doors to the flood of desperate people fleeing the bloodshed.

The UNHCR now resettles a majority of Iraqis in the United States but the process has also been slowed by individual security checks and logistics. The agency submitted 100,000 Iraqis for resettlement in 2007 but as of last month, only 50 percent of those people had departed for new homes, the UNHCR said.

On the flip side, voluntary repatriation in 2009 hit a new low in two decades. The UNHCR said that 251,500 refugees returned home last year; of those, only 38,000 were Iraqi.

"The growing resilience of conflict results in a larger proportion of refugees who are unable to return to their homes," Guterres said. "Conflicts that we had hoped were on their way to being resolved are stagnating."

Though Middle Easterners make up a chunk of the global refugee population, Syria will become the first regional nation to host World Refugee Day on Sunday. Later Friday, U.S. Secretary of State Hillary Clinton is slated to speak at a World Refugee Day event in Washington.