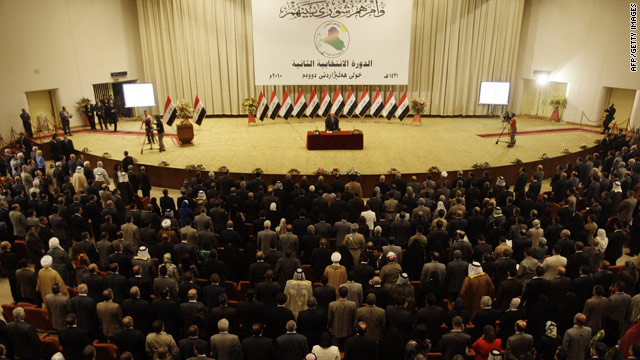 The 325 new lawmakers took their oath of office during the largely symbolic 15-minute session, then suspended it for politicians to continue trying to hammer out agreements.

It was the first time the political opponents had met in person since the elections. Both say they should get the first chance to form a new government and become prime minister.

The first session of parliament comes a day after a bombing and gunfire left at least 15 people dead and 45 wounded in central Baghdad.

Overall violence in Iraq has dropped drastically over the past two years compared to the height of the sectarian war in 2006 and 2007, but bombing attacks have continued.

By law, parliamentarians must elect a speaker and two deputies in their first sesson. Suspending the session at the end of its brief meeting Monday, rather than adjourning, gives lawmakers time to keep negotiating without breaking the rules.

Acting parliament speaker Fouad Massoum urged lawmakers to resolve the deadlock quickly, saying they owed it to voters who had risked their lives to cast ballots March 7.

"The voters who risked their lives and the lives of their families to cast their votes are looking forward to us speeding up the process of government formation and then being completely dedicated to serving the public and providing their security and stability ...needs," Massoum said.

After months of political jockeying, key issues remain unresolved and no Cabinet is expected to emerge for several months.

Al-Iraqiya is insisting on what they say is their constitutional and democratic right to form a Cabinet.

But since the election, al-Maliki's bloc has merged with the other main Shiite bloc, the Iraqi National Alliance.

The mega-Shiite coalition announced on Thursday under the name The National Alliance has a 159-seat parliamentary bloc, four seats short of a majority.

Like al-Iraqiya, the National Alliance is claiming the right to form the government, something al-Maliki and Allawi did not discuss on Saturday.

Western officials and Allawi himself have warned that any attempts to sideline al-Iraqia could reignite violence that gripped the country for years after the 2005 elections, when a Shiite-led government emerged and Sunni Arabs were alienated.

Allawi's al-Iraqiya list was the main choice for the country's Sunni Arab population who turned out in large numbers to vote after largely boycotting the 2005 elections.

The political uncertainty comes at a critical time for Iraq, with the U.S. military in the process of drawing down its troop levels from the current 88,000 to a non-combat force of 50,000 by September 1.

Iraqis have grown used to the slow pace at which their politicians move, with the previous parliament passing onto their successors key legislation they failed to pass.

Many Iraqis are frustrated with their standard of living, the lack of basic services and, most importantly, security; things they hope their new representatives will deliver.

The parliamentary chamber in Baghdad's fortified International Zone was full of new faces. Only 64 of the 325 representatives served in the previous parliament.

But the first row was lined with Iraq's current senior leadership and top politicians like al-Maliki, Vice Presidents Adel Abdul Mehdi and Tareq al-Hashimi, in addition to Allawi and Ibrahim al-Jaafari, another former prime minister.

Reflecting Iraq's diverse ethnic composition, the oath taken by the lawmakers was administered first in Arabic and then in Kurdish after Kurdish parliamentarians requested it.

The new parliament is the second elected to a full term since the overthrow of Saddam Hussein in 2003.