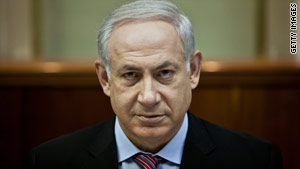 "The government is going to establish an independent public commission that would be headed by individuals who are totally impartial, who are not connected with the executive branch and an investigation that would reach the highest international standards," an Israeli official told CNN.

"The investigation will be impartial, professional, comprehensive and transparent. The hope is that in addition to the Israeli members of the commission there will be international observers who will be renowned by their professional expertise and antiquity," the official said.

The White House said the investigation is an "important step forward." In a statement released Sunday, the Obama administration called for a prompt inquiry and asked that results be presented to the international community.

At his weekly cabinet meeting Sunday, Netanyahu said Israeli policy was not to deny aid from reaching Gaza.

"Before the flotilla set sail for Gaza, we discussed -- in various forums -- the continuation of our policy toward the Gaza Strip," Netanyahu said. "The principle guiding our policy is clear -- to prevent the entry of war material from entering Gaza and to allow the entry of humanitarian aid and non-contraband goods into the Gaza Strip."

Tony Blair, special envoy to the Middle East for the Quartet, praised the prime minister's comments. The Quartet is a group of countries and international organizations mediating the Middle East crisis, made up of the United States, United Nations, European Union and Russia.

"I hope this will enable us to move decisively to a policy on Gaza which keeps out weapons and other combat related material but lets in as a matter of course those items that Gazan people need to improve their lives. This also will enable the U.N. projects for re-construction to go ahead," Blair said.

Meanwhile, Iranian President Mahmoud Ahmadinejad told Iran's state TV that he knows that Israel had plans for another attack on Gaza, and he said further assaults on the territory could yet happen. He did not elaborate.

He also that the failure of the United Nations Security Council to pass a resolution condemning Israel served to undermine the credibility of the council.

Israeli commandos intercepted the flotilla at sea May 31 and stormed the largest vessel, the Turkish-flagged Mavi Marmara. At least nine people aboard the ship were killed.

CNN's Guy Azriel and Shirzad Bozorgmehr contributed to this report.