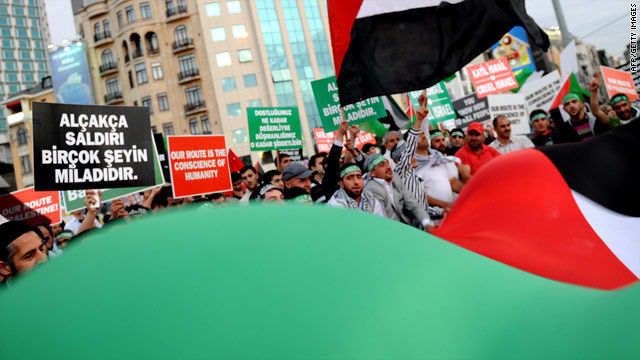 Istanbul, Turkey (CNN) -- An anguished sob echoed outside the Sultanahmet courthouse in Istanbul on Wednesday morning.

A bald, bearded man stumbled out of the building, moaning and weeping. He was followed by a crying woman who wore a headscarf and a long trench coat.

While inside the courthouse, filing a petition asking Turkish prosecutors to sue Israel for murder, the woman had received a phone call identifying her husband, Cevdet Kiliclar, as one of nine people killed by Israeli commandos aboard the Turkish ship Mavi Marmara on Monday.

Kiliclar was one of the spokesmen for the Humanitarian Relief Foundation, or IHH. This Turkish Islamist charity organization helped organized what activists called a "Freedom Flotilla" of six ships. The flotilla aimed to run Israel's three-year blockade of Gaza on Monday before a pre-dawn raid against the convoy by Israeli commandos left some of the activists dead.

Organizers said the flotilla was trying to deliver 10,000 tons of humanitarian supplies to Palestinians in Gaza. Israeli officials have accused the activists of being part of a "convoy of hatred and violence."

The Israeli military accuses activists of assaulting Israeli commandos with steel poles, knives and a plastic chair when the troops rappelled down on ropes from hovering helicopters onto the deck of the Mavi Marmara during a pre-dawn raid carried out while the convoy was in international waters.

The proposed suit Turkish prosecutors are being asked to file accuses Israeli President Shimon Peres, Prime Minister Benjamin Netanyahu and a number of other top Israeli ministers and military commanders of murder and attempted murder. It was not immediately clear when prosecutors would decide whether to file the suit.

The Israeli government, meanwhile, has accused IHH of having links to the Palestinian movement Hamas as well as to al Qaeda. The Israeli military has released photos of metal poles, slingshots and marbles captured on board the Mavi Marmara to back up its claims that the flotilla's activists were armed and spoiling for a fight.

"Those marbles were gifts for orphaned children in Gaza that we had been packing for a week," said Hanife Gokdemir, the wife of an IHH official who she said is still in detention after being captured aboard the Mavi Marmara.

"I believe we won a victory," Gokdemir added. "The world is now more aware today of the situation in Gaza."

On Wednesday, Turkey's top diplomat said announced at a press conference in Ankara that his government has threatened to sever all ties to Israel, its former Middle Eastern ally, unless 468 Turkish protesters captured by Israeli authorities aboard the aid convoy were handed over immediately.

"Our government will protect our Turkish citizens," said Foreign Minister Ahmet Davutoglu. "No one should test that."

On Wednesday, the Turkish parliament unanimously voted in favor of a declaration condemning the Israeli commando raid. The motion calls on the Turkish government to reassess its economic and military relations with Israel.