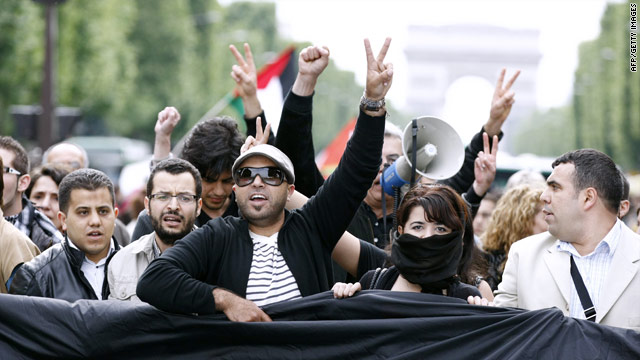 Protesters gather in front of the Arc de Triomphe in Paris, France, on Monday during a demonstration against Israel's deadly raid on an aid flotilla.
STORY HIGHLIGHTS

(CNN) -- As world leaders came out Monday against an Israeli raid on a flotilla carrying humanitarian supplies to Gaza, so did protesters in various cities around the world.

In New York's Times Square, more than 500 people gathered and then marched through midtown to the Israeli consulate.

One of the protest's organizers, Lamis Deek, told CNN that planning for the protest began almost immediately as soon as news of the Israel's storming of the flotilla was broadcast. At least nine pro-Palestinian activists, who were trying to deliver aid to Gaza by circumventing an Israeli blockade, were killed.

The incident exposed "what the Israeli government and its structures are capable of doing and what their intentions are, not just toward the Palestinian people, but rather toward the Arab world and anyone who challenges their policies," Deek said.

Read the latest news about the attack

In France, hundreds of pro-Palestinian demonstrators, throwing rocks and beer bottles, fought police Monday night in an attempt to reach the Israeli Embassy in Paris.

Police closed the Champs Elysees to traffic as they confronted nearly 1,000 protesters.

Demonstrators smashed a police truck window, and attempted to force their way through police lines blocking the embassy.

Meanwhile, hundreds of supporters of radical Shiite cleric Muqtada al-Sadr took to the streets of Baghdad, Iraq, in protest.

They chanted: "No, no Israel, no, no America, yes, yes Palestine."

Some of the banners were written in English and strongly criticized Israel's response to the flotilla.

"My message to the world and especially to the Islamic and Arab world (is) that they should take practical steps to punish Israel not only on this crime but on all the crimes that Israel has committed before because the condemn and denounce letters and messages are not enough anymore," one of the protesters, Abdul Zahar al-Tamimi told CNN.

A number of Iraqi parliament members and politicians participated in the protest, including the Iraqi interior minister.

Israelis themselves also protested, but against Turkey for calling an emergency meeting of the United Nations Security Council Monday.

Hundreds of Israelis in Tel Aviv gathered in front of the Turkish Embassy there to protest Turkish involvement in the incident, according to the website Ynet.