Convoy of ships heads to Gaza in attempt to break blockade 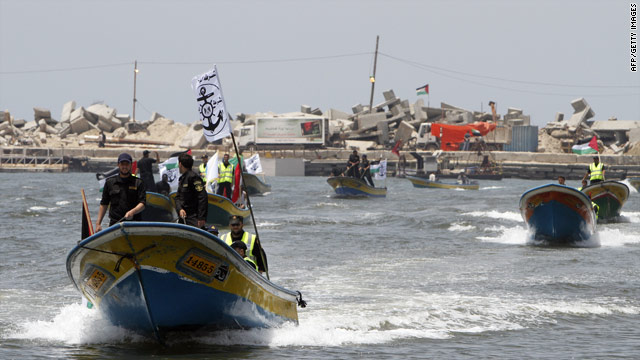 Jerusalem (CNN) -- The Israeli government said Thursday it will stop a convoy of cargo and passenger ships filled with supplies and headed to Gaza to break a blockade imposed by Israel in 2007.

Government officials said Wednesday they have given the Israeli Defense Forces instructions to reroute the flotilla to Ashdod port in Israel, where the supplies will be unloaded and transferred to Gaza.

The convoy, which left various European ports, is organized by two major groups: the Free Gaza movement, a pro-Palestinian human rights organization, and the IHH movement, a Turkish humanitarian relief foundation affiliated with the Islamic Brotherhood.

Organizers said the convoy is carrying 10,000 tons of construction material, medical equipment and school supplies, and about 750 activists of different nationalities.

Israel's Ministry of Foreign Affairs, said Yossi Gal, its director-general, has summoned the ambassadors of Turkey, Greece, Cyprus, Sweden and Ireland -- the countries from which the flotilla set sail -- and "clarified the state of Israel's official position, which declares the flotilla an absolute provocation: There is no shortage of humanitarian aid to Gaza, as food products, fuel and supplies are constantly transferred into the Gaza Strip by the international organizations."

The flotilla is "invited to dock at Ashdod port, to unload their cargo and transfer it to Gaza, after a security check, either via the Israeli authorities or via the humanitarian organizations," the ministry said.

Hanin Zoabi, a member of Israel's parliament, the Knesset, and a passenger on the flotilla, called it a "humanitarian campaign for the 1.5 million Palestinian people who Israel put in jail for about the last four years without allowing building material, without educational material, without food into the Gaza strip.

"Israel destroyed 165 schools and more than 100 (factories) and destroyed tens of thousands of houses without enabling the Palestinians to rebuild their homes and their lives," Zoabi said. "This is a very strong political message towards Israel and towards the Arab world that stood silent regarding what is happening in Gaza."

Regev argued that the activists maintain a double standard when it comes to Hamas' actions.

"They call themselves human rights activists, but they remain silent when it comes to Hamas' deliberate targeting of Israeli civilians and the brutalities of the Hamas regime in Gaza, which has crushed political opposition, suppressed independent media and has locked up hundreds of political opponents."

Sarah Weiss Maudi, an Israeli Foreign Ministry legal expert, said, "The naval blockade has been imposed by Israel because Israel is currently in a state of armed conflict with the Hamas regime that controls Gaza."

Under international maritime law, when a maritime blockade is in effect, no vessels can enter the blockaded area.

Maritime blockades are a legitimate measure under international law, and may be implemented as part of an armed conflict at sea, Israeli officials have said.

"The objective of the boats is to break Israel's siege on Gaza, to break Israel's blockade on Gaza. The material that we have on board are all of the materials that Israel denied to the people of Gaza like cement, building supplies, educational supplies etc," said Greta Berlin, co-founder of Free Gaza movement.

"... This is an important aim of Israel, is to stop the cameras in order for the participants who are participating in this flotilla and the others who are following it not to see the aggression of the Israeli army, but I think this does not threaten us and it does not bring fear among us," she said.

Noam Shalit, father of captive Israeli soldier Gilad Shalit, told CNN he offered through his lawyer to attempt to convince the Israeli government to let the flotilla arrive in Gaza if participants would pass aid, including letters and medicine, to his son. The organizers of the convoy, including Berlin, refused, he said, telling him their main purpose is to break the siege.

Gilad Shalit has been held captive since June 2006, when Palestinian militants from Gaza captured him. Noam Shalit says his son has been kept in total isolation for the past four years, a violation of international conventions and against international law.

There have been eight naval convoys to Gaza until now, and Israel has allowed three to dock at the Gaza port.

The most efficient system to transfer goods to Gaza is through the land crossings, Palmor said.