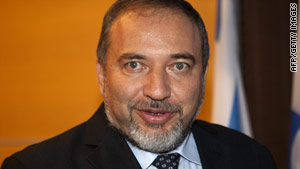 The recommendation comes after Israeli investigators asked authorities in Belarus for information related to a larger investigation of Lieberman.

That request went through Israel's former ambassador to Belarus, Zeev Ben Arieh, and police say he tipped off Lieberman to what the Israeli investigators were seeking, Rosenfeld said.

The Israeli attorney general will decide whether to pursue indictments in the case.

The investigators asked authorities in Belarus for information as part of a larger probe of Lieberman that has spanned several years.

In 2009, Israeli police recommended charging Lieberman with a slew of crimes following a lengthy corruption probe.

Investigators said then they "believe there is sufficient evidence to charge him with the crimes of bribery, fraud, obstruction of justice, harassing a witness, breach of trust and money laundering offenses."

The alleged crimes date back to before Lieberman became foreign minister in 2009. The Attorney General has not decided on the police recommendation.

Lieberman has held various government posts through the years. He is also the founder and leader of the controversial right-wing Yisrael Beiteinu political party.

CNN's Mark Bixler and Michal Zippori contributed to this report.