Iranian reporter, sentenced in absentia, lashes out against regime 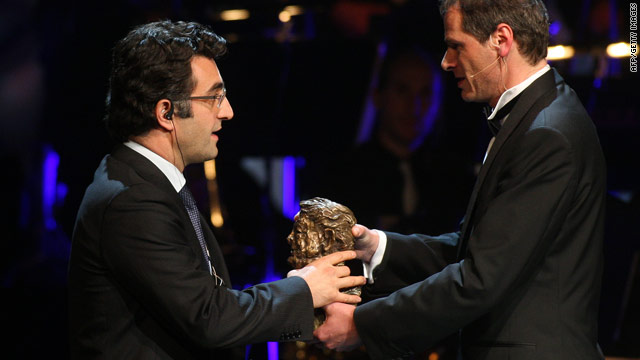 (CNN) -- An Iranian-Canadian journalist says it "saddens" him that his daughter may never see her father's country.

Maziar Bahari, who spent 118 days in Iran's notorious Evin prison last summer, told CNN Wednesday that Iran's Revolutionary Court sentenced him in his absence to 13 and a half years in prison and 74 lashes for six charges ranging from propagating against the state to insulting President Mahmoud Ahmadinejad.

"It makes me angry that the people of Iran, an educated talented nation, have been taken hostage by a group of thugs who are ruling the country," Bahari said.

Bahari first learned of his sentence from a relative in Tehran who was summoned to the court, but "neither myself nor my lawyers" were informed officially by authorities, he said.

"The sad thing is a lot of people in Iran have suffered from these ridiculous sentences. They have no respect of lives, individual freedoms, and they interpret the laws in any which way they want." Bahari said.

Iran's foreign ministry is neither confirming nor denying Bahari's sentence.

"It's possible that some people, because of their activities, may have been sentenced and the judicial process, when it comes to them, is taking its course," said foreign ministry spokesman Ramin Mehmanparast, according to the semi-official news agency Tabnak.

Security officials picked up Bahari at his mother's home last summer, after he reported on the postelection protests for Newsweek magazine. He was kept at Evin prison in solitary confinement where he says he was tortured and humiliated.

He was released in October on 3 billion rials ($300,000) bail and allowed to leave the country to return to his pregnant wife in the United Kingdom.

Bahari says that he cannot return to Iran as long as the Islamic Republic regime is standing.

"They want to keep people like me quiet, outside of Iran. They want to say we control the lives of every citizen, even those people who are not in country. But I think it's my responsibility for me to speak out about this," he said.

Ahmadinejad's landslide re-election in June sparked massive protests throughout the country, the largest since the 1979 Islamic Revolution.

Opposition Web sites in Iran have reported that more than 4,000 opposition supporters have been arrested.

The Iranian regime blames the United States and Europe for influencing the protests and igniting violence.