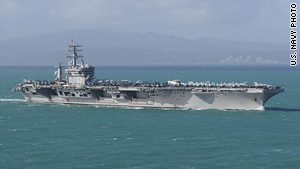 The incident, first reported by CNN on Tuesday, came as Iran was beginning a series of military exercises last week meant to show off their military prowess.

The Eisenhower was on duty in the Gulf of Oman in the northern Arabian Sea, in support of the Afghanistan war efforts, when the Iranian maritime patrol aircraft flew within 1,000 yards of the vessel, according to military officials.

While the encounter was not threatening, it was unusual. U.S. navy ships have regularly encountered Iranian aircraft in the Persian Gulf in recent years, but this encounter took place in the Gulf of Oman, in an area where Iranian jets are seen much less frequently, several Navy officials said.

The officials declined to be identified, citing the extremely sensitive nature of any U.S. military interaction with Iranian forces.

Adm. Gary Roughead, the top Navy officer, confirmed the April 21 incident. The Iranians were "not provocative or threatening. As long as they are professional and not threatening or reckless, it's international space," he said.

Radar on the Eisenhower and other U.S. ships in the vicinity closely tracked the Iranian aircraft as it approached the aircraft carrier to ensure it maintained a nonthreatening path, Roughead said. A senior U.S. military official said the Iranian plane was tracked by U.S. units for nearly 100 miles before it reached the Eisenhower.

The Iranian aircraft was a Fokker F27 that was unarmed, officials said. It remained in the vicinity of the Eisenhower for about 20 minutes before leaving the area, according to the senior official. The Eisenhower had just finished a series of carrier aircraft flight operations and a resupply at sea mission.

U.S. officials believe the Iranians wanted a close look at the carrier, but they could not say if the Iranians took photos of the ship.

One of the officials also said Iran may simply have been trying to demonstrate its aerial capabilities to the United States.

U.S. military officials continue to emphasize that recent encounters with Iranian naval forces in the Persian Gulf have been professional and without confrontation or problems. The U.S. Navy takes great care to try to stay out of the way of any Iranian forces in the region, officials said.