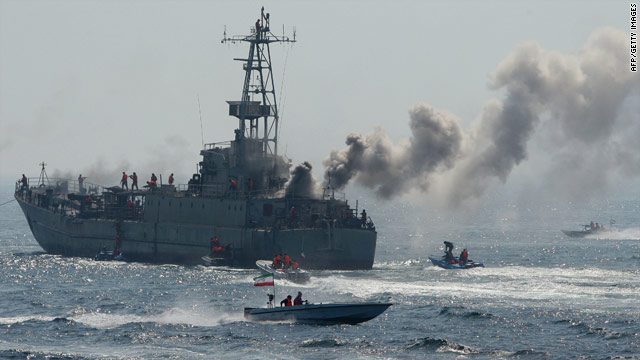 The missiles were fired simultaneously and struck a single target at the same time -- a feat the Revolutionary Guard Corps described to the Islamic Republic of Iran Broadcasting as "very important."

The military exercises on Sunday also included high-speed boats waging a "war" against a warship.

The maneuvers fell on the 31st anniversary of the elite force and were designed to demonstrate new weapons systems.

Video: Will Israel act against Iran?

Brig. Gen. Hossein Salami, deputy chief of the Revolutionary Guard told Iranian media that the exercises were aimed at demonstrating Iran's "strength, will and national resolve to defend independence and territorial integrity."

The U.S. military official noted there have been several Iranian exercises in the past, but this one received attention because the Revolutionary Guard Corps discussed it publicly in advance.

The U.S. Navy currently is operating several warships in the region, and commanders are often reminded not to let any encounters with Iranians inadvertently escalate.

Iran's missile development is being watched closely by the United States, which is pressing for tougher sanctions against the Islamic republic for its controversial nuclear program.