Navy SEAL not guilty of charges in Iraq 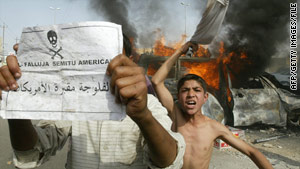 Baghdad, Iraq (CNN) -- The first of three Navy SEALs accused of mishandling a suspect in the high-profile killings of contractors in Iraq was found not guilty at a court-martial Thursday.

U.S. authorities accuse Abed of being the mastermind in the slayings and mutilation of four U.S. contractors in Falluja in 2004, one of the Iraq war's most notorious crimes against Americans.

During Huertas' court-martial, Abed testified Wednesday that he was handcuffed, blindfolded and beaten.

Huertas and Keefe had been charged with dereliction of duty, based on the allegation that they failed to safeguard the detainee, according to the military. Huertas also was charged with impeding an investigation by attempting to influence the testimony of another sailor.

Keefe's court-martial was supposed to have opened Monday, but it was delayed after defense attorneys were stuck in Europe because of flight delays due to ash from the Icelandic volcano. That court-martial is expected to begin Friday morning.

The case against the SEALs has sparked outrage that the sailors are being tried at all for handling a suspect in the contractors' killings. A Facebook page called "Support The Navy SEALs who Captured Ahmed Hashim Abed" has almost 120,000 members.

After the contractors for the security firm Blackwater were killed with hand grenades and rifles, their bodies were set on fire and dragged through the streets. Two of them were hung from a bridge in Falluja, an image that was broadcast around the world.