Palestinians object to definition of 'infiltrator' 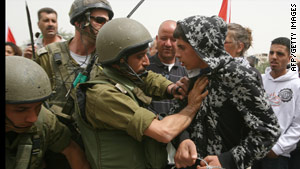 Israeli soldiers detain a demonstrator during a protest along the West Bank barrier on Sunday.
STORY HIGHLIGHTS

The order, which will take effect on Wednesday, poses a threat to thousands of Palestinians who will now be considered illegal under the new regulations.

The new order is in fact an amendment to an existing order from 1969. It extends the definition of an infiltrator to "a person who is present in the area and does not lawfully hold a permit." The order threatens those defined as infiltrators with deportation or imprisonment of up to seven years.

It is unclear from the wording of the document -- signed six months ago by the commander of the IDF in the West Bank at the time, Maj. Gen. Gadi Shamni -- exactly who would fall under the new provisions. Clauses in the order state that "a person is an infiltrator if he is present in the area without a document or a permit indicating his lawful presence in the area without reasonable justification."

A permit would be a document "issued by the commander of IDF forces in the Judea and Samaria area or someone acting on his behalf, or issued by the authorities of the State of Israel," according to the document, using the Israeli terminology referring to the West Bank.

The human rights organization Hamoked and nine other rights groups urgently appealed to the Israeli defense minister, demanding postponement of the implementation of the order that the groups said "will turn all residents of the West Bank into criminals."

Chief Palestinian negotiator Saeb Erakat said in a statement: "These military orders belong in an apartheid state. Extensive in scope, they make it infinitely easier for Israel to imprison and expel Palestinians from the West Bank. They are an assault on ordinary Palestinians, and an affront to the most fundamental principles of human rights."

He added, "These orders have the effect of turning Palestinians into criminals in their own homes, while directly undermining the efforts of Palestinians to run their own internal affairs. They also open the flood gate for Israel to target foreign-born spouses, foreign workers, and even Israeli citizens as 'infiltrators', as well as anyone participating in demonstrations in support of Palestinian rights and against Israel's occupation."

"The fewer Palestinians there are in the West Bank, including in occupied East Jerusalem, the more settlers there will be. Israel's endgame is not peace. It is the colonization of the West Bank."

An IDF spokesman told CNN: "The purpose of the order which was signed by the ... central command and which is scheduled to become affective on April 14th, is the extradition of those residing illegally in Judea and Samaria. This is a preexisting order which has no change with regard to who is illegal or illegal. There was a correction to ensure judicial oversight of the extradition process".