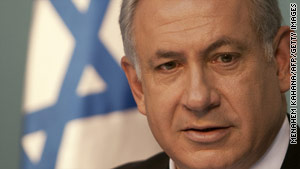 (CNN) -- Israeli Prime Minister Benjamin Netanyahu has informed the Obama administration that he will not attend President Obama's nuclear security summit in Washington next week, according to a senior U.S. official familiar with the situation.

The move could be a sign of further tension between the United States and Israel and may distract from the Obama administration's attempts to highlight the unprecedented nature of a 46-nation summit aimed at reducing nuclear weapons.

"Israel is a close ally, and we look forward to continuing to work closely with it on issues related to nuclear security," Hammer said Thursday. "This is a summit focused on addressing the security of nuclear materials and geared toward having the participants take practical measures to ensure that terrorists cannot get access to those materials."

The news comes after Obama and Russian President Dmitry Medvedev signed a major nuclear arms treaty in the Czech Republic earlier Thursday. The new Strategic Arms Reduction Treaty -- known as START-- reduces the number of nuclear weapons held by the United States and Russia by about one-third, among other provisions.