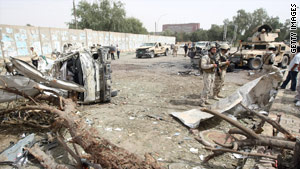 Debris litters the ground at the site of an explosion near the Iranian Embassy in Baghdad, Iraq, on Sunday.

The blasts went off within five minutes of one another, all near embassy buildings in the capital.

Two of the explosions occurred in the Mansour neighborhood in western Baghdad. One blast was close to the Egyptian Embassy, the other near a complex that holds a number of embassies, including those of Syria and Germany.

The third car bomb exploded near the Iranian Embassy in the central part of the city.

"Is this the result of the elections we voted in?" asked Fued Ahmed, a resident who lives near the Iranian Embassy. "We voted. What did we vote for? The explosion? If they can tell us where there's a safe place that we can go to, we'll go there."

An elderly man added, "Don't talk to me, talk to the government -- with Nuri al-Maliki, with Ayad Allawi, ask them why all these victims lost their lives." He was referring to the current prime minister and head of the Iraqiya bloc, respectively.

In a statement, the Iraqiya coalition said that the day's bombings highlight "the indisputable violations of these security forces and their failure in halting terrorism, which has stolen the lives of tens of thousands of innocent martyrs of people in Iraq."

The Iraqiya bloc, which won a narrow victory in recent elections, implored the current government to restore peace until the formation of the new government.

For his part, al-Maliki called an urgent meeting Sunday with his national security council.

In addition to Sunday's bombings, the security council discussed the killings of 25 people late Friday in a Sunni village near Baghdad by gunmen wearing military uniforms.

In that incident, five of the dead were women. Most of the victims were shot in the head, and all were found handcuffed, police said. Al Qaeda in Iraq is suspected to be behind the killings, but authorities stressed the investigation is ongoing.

Also Sunday, Baghdad police reported two roadside bomb explosions in Baghdad. One injured nine people and the other wounded five people. Six police officers were among the injured in those blasts.

In the city of Mosul, a car bomb exploded, killing three civilians and injuring 35, including seven policemen, police said.

The series of suicide bombings near the embassies was the fifth coordinated attack in Baghdad since August 2009.

In the last, in January, at least 36 people were killed and 71 wounded when three vehicle bombings targeted hotels in central Baghdad.

Other coordinated attacks killed 132 people in October and nearly 130 people in December. In the latter, a string of five suicide car bombings hit government buildings, including Iraq's Finance and Labor Ministries, and a courthouse.