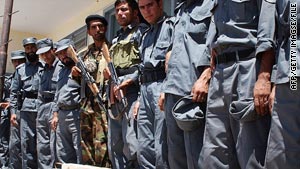 The information came from an "Iranian source" whose tips on past shipments have been verified by the United States, the official said.

The official declined to be identified because of the sensitive nature of the information. He also declined to offer more details on the identity of the Iranian source. Intelligence gained by talking to people, sometimes referred to as "human intelligence," is always considered sensitive for fear of compromising sources.

"There are indications the Iranians have stepped it up," the official said.

But another U.S. official said Iran is only providing "limited supplies of weapons to the Taliban ... not enough to cause major problems for coalition forces."

The official also noted that Iran -- a majority Shiite country -- and the Sunni Taliban almost went to war with one another in the late 90s, so it's not really in their interest to be a major source of top-shelf arms to the Taliban.

Earlier this week, however, Adm. Michael Mullen, chairman of the Joint Chiefs of Staff, told reporters in Afghanistan he was 'taken aback" when he learned of a "significant shipment" of weapons from Iran into Kandahar in southeastern Afghanistan. Mullen and his aides declined to offer any other details.

And the Defense Department official said the source has told the United States of "volumes of Iranian munitions coming into Afghanistan."

U.S. and coalition troops have seen evidence of some Iranian weapons inside Afghanistan found in seized caches or in the aftermath of attacks. Some munitions have recent manufacturing dates and serial numbers.

"That leads us to believe there are ongoing and current shipments coming into Afghanistan from Iran," the official said.

The Iranian weapons include not only rockets and grenades but also material and explosives to make improvised explosive devices. The official said the United States has found high explosives that are clearly manufactured in Iran with a particular process and design "similar to what we saw with Iranian weapons in Iraq."

The Pentagon official said some of the upcoming shipments might be designated for Kandahar, adding that the U.S. military would do everything it could to stop that from happening. The official indicated it had been several months since coalition forces had seized any weapons shipments at Afghanistan's western border with Iran. Authorities believe shipments are broken up into smaller loads at the border and then brought into the country as unobtrusively as possible by truck convoys.

The issue of just how much Iran is interfering inside Afghanistan remains under debate in the administration's national security circles. Recently, Defense Secretary Robert Gates accused Iran of playing a "double game" in Afghanistan, both aiding the Taliban and more publicly helping finance some public institutions. But he then described Iranian assistance to the Taliban as "pretty low-level."

"We have really not seen an increase of Iranian assistance, whether it's equipment or weapons or training, in western Afghanistan," Gates told reporters on February 22. "We're obviously keeping an eye on it, but it seems pretty modest at this point."