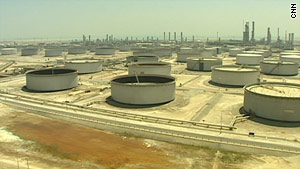 (CNN) -- More than 100 people accused of planning attacks against police and oil installations have been arrested in Saudi Arabia, an Interior Ministry spokesman told CNN on Wednesday.

The Saudis have been cracking down on militants for years. The Interior Ministry is publicizing this latest information to make the public aware of the bad intentions of some visitors to the kingdom.

The incident that sparked the arrests took place in October 2009, the ministry said. Two Saudi nationals disguised as women fired on a police unit, it said.

Police returned fire and killed both men before they were able to detonate their explosive belts. Officers confiscated two extra suicide belts the men had carried with them, along with hand grenades, ammunition and foreign currencies.

Intelligence from the incident led to the discovery that local residents had built terrorist cells made up mainly of residents and some foreigners who had entered the kingdom with the aim of committing suicide attacks against national structures and police, the Interior Ministry said.

The investigation resulted in the arrest of more than 100 people directly linked to the two Saudi nationals in the October incident, the ministry said. Among those are 47 Saudis, 51 Yemenis, one Somali, one Bangladeshi and one Eritrean.

Security officers also came across two suicide bombing cells with six members each and that were working independently of one another but were both linked to al Qaeda in the Arabian Peninsula, the ministry said. It said officers arrested all 12 members -- 11 Saudis and one Yemeni -- as they were in the early stages of planning attacks against oil and security facilities in the Sharqiya region.

The Saudis have been particularly concerned with the terror group since al Qaeda in Yemen merged with its Saudi counterparts to form al Qaeda in the Arabian Peninsula, a U.S. official told CNN. Al Qaeda in the Arabian Peninsula has made it clear its focus is on targeting government and western interests in both Saudi Arabia and Yemen, the official said, adding that this most recent plot does not appear to be connected to any operation beyond Saudi Arabia.

Al Qaeda launched a wave of attacks on government buildings, oil installations and international contractors in Saudi Arabia in 2003. The Islamic fundamentalist movement supports the overthrow of the Saudi monarchy and carried out the September 11, 2001, terrorist attacks in the United States, the kingdom's leading ally. The Saudis responded with thousands of arrests and, in some cases, fought gun battles with militants in Riyadh and other cities.

Amnesty International last year issued a report saying that Saudi Arabia's campaign against the al Qaeda terrorist network had led to "massive human rights violations" by security forces, including torture and the arrest of non-violent reformists.