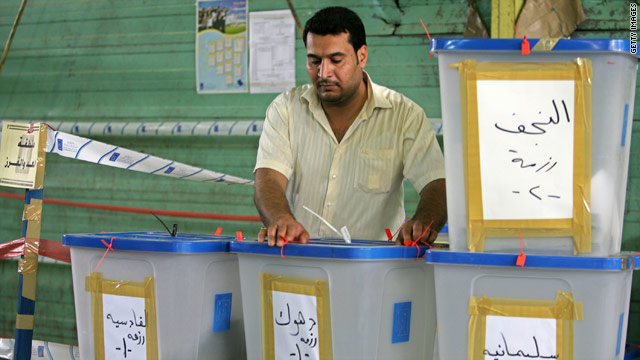 An Iraqi electoral worker with ballot boxes at a counting center in Baghdad, Iraq on March 17, 2010.
STORY HIGHLIGHTS

The Independent High Electoral Commission announced on Thursday evening that with 89 percent of the votes counted from the March 7 election, al-Maliki's State of Law coalition maintained a narrow lead in seven of Iraq's 18 provinces, including Baghdad province. The province, which includes the capital city, is the most populous.

The prime minister's coalition is now ahead of former interim Prime Minister Ayad Allawi's bloc by about 40,000 votes.

The partial results show that Allawi's bloc is holding on to a lead in five provinces.

Those partial results include about 70 percent of the special vote from security forces, detainees and hospital patients, the electoral commission said. But they still do not include the more than 270,000 out-of-country votes.

Votes are still being tallied and the race is still too close to call. Complete preliminary results are expected over the next few days.

Aside from al-Maliki and Allawi's blocs, the mostly Shiite Iraqi National Alliance was ahead in three of the country's predominately Shiite southern provinces. The Kurdistan Alliance, comprised of the two Kurdish parties -- the Patriotic Union of Kurdistan and the Kurdish Democratic Party -- led in the three provinces in Iraq's semi-autonomous region of Kurdistan.

However, a competitor to the the Kurdistan Alliance has emerged in Sulaimaniya province: Goran, or the Change movement, was only about 50,000 votes behind. The movement, which emerged last year, is a splinter of the Patriotic Union of Kurdistan.

Although the bloc that wins the most seats in parliament will be tasked to form a government, it appears that none will garner at least 163 seats for a majority in the 325-member Council of Representatives. As the votes are tallied, politicians have been negotiating and talking to bolster post-election coalitions.

Election observers and the United Nations, which is assisting the electoral commission, have said that there were no signs of large scale fraud or vote manipulation.

But the top blocs, including the State of Law, have alleged violations and fraud.

The electoral commission has said it is investigating about 2,000 complaints lodged by political entities, fewer than the number filed in last year's provincial elections.