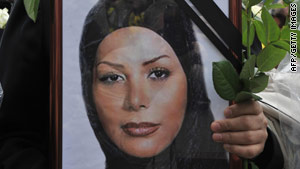 It was the last Thursday before the start of the Persian new year, a day on which Iranians traditionally visit the grave sites of loved ones.

At the Beheshteh Zara cemetery in southern Tehran, the mourners included several who paid respects to Neda Soltan, a 26-year-old woman whose death last year became emblematic of a harsh government response to protests that followed the June 12 vote.

Soltan became known simply as "Neda" after a video camera captured her final moments on June 20; she was shot to death during a post-election protest.

Iran has been wracked by anti-government demonstrations since the disputed presidential vote resulted in hardline President Mahmoud Ahmadinejad's re-election.

The government has beefed up security to ensure "order and calm" during the two-week period celebrating Norooz, a holiday that begins with the first day of spring and the Persian new year.

Authorities have stationed 200,000 security personnel across the country, according to Ahmadinejad's official news site.

In Beheshteh Zara, members of the security forces in plainclothes watched parts of the cemetery where post-election protesters are buried.

Meanwhile, Mehdi and Zahra Ramezani visited the grave site of their son, Ramin, who was killed on June 15.

"People are kind to come here," Mehdi Ramezani said. "I am thankful for the people who remember my son."