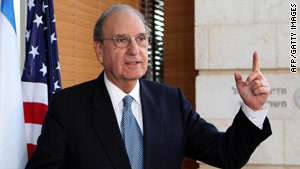 (CNN) -- The U.S. special envoy for Middle East peace has delayed a visit to the region as the United States awaits a response to its demand that Israel reverse a decision on construction in disputed territory in East Jerusalem, according to sources.

The Israeli ambassador to the United States has reportedly called the situation a crisis.

The Obama administration envoy, George Mitchell, was expected back in the region to begin indirect talks with Israeli and Palestinian leaders, but he has delayed his trip, sources said.

Israeli Prime Minister Benjamin Netanyahu has set up a team to investigate the timing of the announcement, which U.S. Secretary of State Hillary Clinton called insulting to the United States.

Clinton also told Netanyahu the United States wants Israel to issue an official declaration that talks with the Palestinians, even indirect talks, will deal with all the conflict's core issues, including borders, refugees, Jerusalem and settlements, the sources said.

Clinton is expected to talk to Netanyahu in the next few days to get the Israeli leader's response, the official said.

State Department Deputy Secretary James Steinberg delivered that message Friday in a meeting with Oren, and Clinton reiterated it in a phone call with Netanyahu, the sources said.

"It's not about words any more," said the U.S. official, who could not speak on the record because of the sensitive nature of the diplomacy. "We need to see some concrete steps."

Earlier, Netanyahu spokesman Mark Regev said he could not confirm whether Clinton presented Israel with a set of demands.

Netanyahu was focused on trying to "calm things down," Regev said.

Speaking Monday during an event at the Knesset, the Israeli parliament, Netanyahu argued that such construction has been going on for decades and does not hurt Arabs.

"In the last 42 years, there has not been a government that has limited the building in Jerusalem," he said, citing several suburbs of the city. "The development of these Jewish neighborhoods never hurt in any way the Arabs in East Jerusalem and did not come on account of them."

He added there is broad agreement that such neighborhoods will remain part of Israel in a final peace agreement.

"We will continue to keep Jerusalem as an open city for all the religions," Netanyahu said, "a city where Jews and Arabs, Christians and Muslims live in co-existence, enjoy freedom to worship at their holy sites."

The Israeli announcement of construction in Ramat Shlomo came during Biden's visit last week. It complicated U.S. efforts to set up so-called proximity talks between the Israelis and Palestinians, the latest attempt to nudge the two sides back toward talking directly.

Biden condemned the decision, calling it "a step that undermines the trust we need right now."