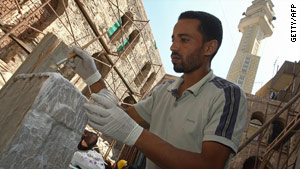 The restoration of the Rav Moshe synagogue in Cairo took 18 months.
STORY HIGHLIGHTS

(CNN) -- Egypt has canceled the opening ceremony for a restored historic synagogue in Cairo in retaliation for restrictions that Israel has placed on a Muslim holy site in Jerusalem, an Egyptian official said Sunday.

The event would have been the culmination of an 18-month restoration of the Rav Moshe synagogue and a 12th-century religious school once used by one of Judaism's most revered figures, a $2 million project that was financed by the Egyptian government.

But the ceremony was canceled "because of what the Israelis are doing with Al Aqsa mosque in Jerusalem," Egyptian antiquities czar Zahi Hawass said.

On Friday, Israeli police imposed new restrictions on worshippers at the Al Aqsa mosque as part of broader security measures that also included the closure of the West Bank. Worshippers younger than 50 and women of any age were not being allowed to attend Friday prayers at the mosque, according to Israeli police spokesman Micky Rosenfeld.

The Al Aqsa mosque houses the Dome of the Rock, the site where Muslims believe the prophet Mohammed ascended into heaven.

Zahi said that Egypt respects its Jewish monuments, "the opposite of what Israel is doing in Jerusalem with Muslim monuments."

Zahi said the Egyptian synagogue would be reopened despite the cancellation of the opening ceremony.

A small group of Jews from around the world gathered in Egypt's capital on March 7 to celebrate the rededication of the synagogue and school.

The school was the study of Rabbi Moses ben Maimon -- better known as Maimonides -- a 12th-century religious scholar and doctor who led the Mediterranean Jewish world and whose patients included Saladin, the Muslim ruler of Egypt and Syria.

The 19th-century synagogue was built in Maimonides' honor.

Rabbi Andrew Baker, an American Jewish Committee official who worked with the Egyptian government on the restoration project said he wasn't surprised that the opening event for the synagogue was canceled.

"The Egyptians appreciate the positive reaction internationally for the restoration work, but they are very cautious of how it plays with a segment of the Egyptian population," he said. "They are showing the domestic audience that they are still critics of Israel."

With just a few dozen Jews left in Egypt and a public that's deeply critical of Israel, Cairo is not the most obvious staging ground for a government-funded restoration of a historic synagogue.

But the Rav Moshe synagogue, in an area of Cairo once called "the neighborhood of the Jews," is the second Jewish house of worship to be recently restored by the Egyptian government. The city's main synagogue was restored in 2007, around the building's centennial.

"We are doing this because it's a part of our history, it's part of our heritage," Zahi told CNN last year, explaining the Rav Moshe synagogue restoration on a tour of the site. "And we care about this temple as we care about a mosque and a church."

The synagogue and school will serve as tourist attractions. Home to 80,000 Jews before the birth of Israel in 1948, there are fewer than 100 left now, and no active Jewish congregations.

He and other Jews from abroad are pressing Egypt to turn one of the synagogues into a museum of Egyptian Jewish heritage.

The Egyptian government has kept largely quiet about its synagogue restoration campaign.

There were no public officials on hand for the rededication of the Rav Moshe synagogue last weekend, and Egyptian security forces prevented some journalists from entering the building, Baker said.

CNN's Ben Wedeman and Amir Ahmed contributed to this report