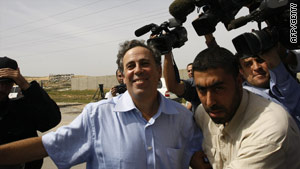 Jerusalem (CNN) -- British journalist Paul Martin was released without charge Thursday, a month after Hamas officials arrested him in Gaza, his lawyer and the British Foreign Office said.

Martin was at the British consulate in Jerusalem, the Foreign Office said. His family said they expect him to fly home to London over the weekend.

Ahmed Yousef, an adviser to Hamas Prime Minister Ismail Haniyeh, said the decision to release Martin was made as a "good will gesture" and was in response to the many calls they had received to let him go.

Yousef said many lawmakers, press organizations, and even South African Archbishop Desmond Tutu had been communicating with Hamas about his release.

Martin is a documentary maker who has worked for the BBC, ITN, and other broadcasters, and reported for the British newspaper The Times. He was arrested February 14 by Hamas on suspicions he was involved with Israeli espionage activity.

Hamas initially detained Martin for two weeks, but extended his detention for 15 more days. Officials from Hamas, the Islamic militant group that rules Gaza, suggested at the time of Martin's arrest that he had been communicating with a Palestinian affiliated with the rival Fatah movement and whom Hamas had accused of collaboration with Israel.

Yousef said in the end, Hamas did not have enough evidence to push the case further. He said Martin, who also holds a South African passport, had been declared persona non grata in Gaza and that it would be "dangerous for him to come back."

Martin's wife, Anne, said the family was "extremely relieved" at her husband's release.

"Paul is an experienced and highly regarded foreign correspondent with 30 years' experience," she wrote in a statement. "He is an innocent man who went into Gaza to testify in the trial of a Palestinian whom he had interviewed for a documentary. Paul has maintained his innocence throughout this ordeal."

As Martin was leaving Gaza, a reporter asked him about the Hamas allegations. Martin replied, "Ridiculous, ridiculous," before closing the door of the car and driving away.

British consular officials had been allowed to visit Martin while he was jailed and the British Foreign office had publicly called for his release. The Tel Aviv Foreign Press Association had also called on Hamas to release Martin, asking the group "to respect the rights of every journalist on assignment, to work without fear of being arrested."

Before Hamas took over Gaza in 2007, the kidnapping and abduction of foreign journalists was a frequent occurrence as part of the factional warfare in the territory.

Since that time, no foreign journalists have been abducted. BBC journalist Alan Johnston was being held by another group in 2007, and was released shortly after Hamas took power.

Palestinian journalists are subject to various forms of restriction and intimidation by authorities in Gaza, but Martin's case was the first time Hamas had arrested a foreign journalist.