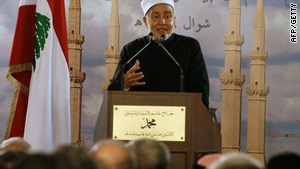 Tantawi, considered a moderate, was the grand imam at Al-Azhar -- an Islamic center and university in Cairo, Egypt.

He played a similar role in the Sunni Muslim world as the pope does for Catholics, involving life issues.

The center's importance in Islam is such that in June when U.S. President Barack Obama gave his one-and-only speech solely directed to Muslims, he delivered it from Al-Azhar.

Tantawi was appointed by Egypt's President Hosni Mubarak in 1996. Although appointed by the Government, Tantawi was regarded as the spiritual leader of about one billion Sunni Muslims worldwide.

His mainstream Islamic views, such as those on suicide bombing, were criticised by Islamists.

He condemned suicide bombing during speech in 2003 at a conference in the Malaysian capital of Kuala Lumpur. He attacked Islamists for using Islam and jihad, or holy struggle, for their own ends and called on Muslims to open themselves to dialogue with the West.