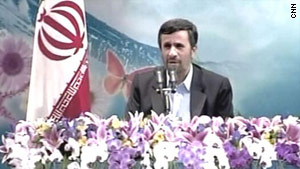 Ahmadinejad had planned to visit Afghanistan Monday -- the same day U.S. Defense Secretary Robert Gates arrived in Afghanistan on an unannounced visit -- but those plans were postponed for unspecified reasons.

The Iranian president plans to travel to Kabul, Afghanistan on Wednesday, said Ramin Mehmanparast, a spokesman for the Iranian Ministry of Foreign Affairs.

He did not offer additional details.

Ahmadinejad has blamed the "problems in its eastern neighbor" on foreign troops there, according to the semi-official Iranian Labour News Agency.

Before the new date was announced, that agency reported that Ahmadinejad planned to meet with Afghan President Hamid Karzai.