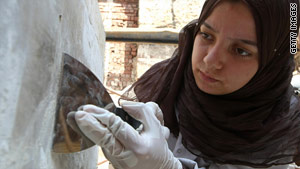 The restoration of the Rav Moshe synagogue in Cairo was the second major project of its kind in the Egyptian capital in recent years.
STORY HIGHLIGHTS

(CNN) -- With just a few dozen Jews left in Egypt and a public that's deeply critical of Israel, Cairo is not the most obvious staging ground for a government-funded restoration of an historic synagogue.

But a small group of Jews from around the world gathered in Egypt's capital on Sunday afternoon to celebrate the rededication of a 12th-century religious school once used by one of Judaism's most revered figures, and a neighboring 19th-century synagogue built in his honor.

The $2 million, 18-month restoration project of the Rav Moshe synagogue, in an area of Cairo once called "the neighborhood of the Jews," was financed by the Egyptian government.

"When I visited the structure five years ago, it was just four walls, no roof, and filled with rubble," said Rabbi Andrew Baker, an American Jewish Committee official who worked with the Egyptian government on the restoration project.

"Now, it will be open to visitors... helping to make the argument that there's a valuable Jewish heritage in Egypt."

The school attached to the synagogue was the study of Rabbi Moses ben Maimon -- better known as Maimonides -- a 12th century religious scholar and medical doctor who led the Mediterranean Jewish world and whose patients included Saladin, the Muslim ruler of Egypt and Syria.

"There's a Hebrew saying that from Moses to Moses, there is no one like Moses," said Baker, the American Jewish Committee's director of international Jewish affairs, who attended Sunday's rededication.

"Which is to say that from Moses on Mount Sinai to Moses Maimonides, there has never been anyone so prominent."

The restored synagogue and school will serve as tourist attractions.

Home to 80,000 Jews before the birth of Israel in 1948, there are fewer than 100 left now, and no active Jewish congregations. Visiting rabbis from abroad sometimes host holiday services.

The Rav Moshe synagogue is the second Jewish house of worship to be recently restored by the Egyptian government. The city's main synagogue was restored in 2007, around the building's centennial.

"We are doing this because it's a part of our history, it's part of our heritage," he told CNN last year, explaining the synagogue restoration on a tour of the site.

But the American Jewish Committee's Baker said that Egypt plans to restore a half dozen more synagogues in coming years. He and other Jews from abroad are pressing Egypt to turn one of the synagogues into a museum of Egyptian Jewish heritage.

The Egyptian government has kept largely quiet about its synagogue restoration campaign. There were no public officials on hand for the rededication of the Rav Moshe synagogue on Sunday, and Egyptian security forces prevented some journalists from entering the building, Baker said.

"There is a certain nervousness in the government about how the general society and the cultural and political classes will receive this," said Baker.

"There is a real conflation of Israel and the Jews and the Middle East is a highly charged issue. There's nervousness that people will try to politicize this."

There are also security concerns. A man hurled a makeshift bomb at Egypt's main synagogue last month, but no injuries or damage were reported.

Local independent media reported that Egyptian police, soldiers, and civil defense personnel closed the streets around the synagogue and that usually busy nearby shops were shuttered.

The Egyptian ambassadors from the U.S., Israel, and Spain -- the birthplace of Maimonides -- attended Sunday's dedication, Baker said.