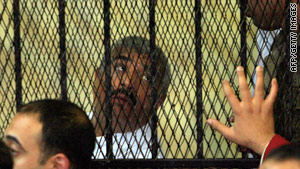 (CNN) -- Egypt's highest court on Thursday overturned the conviction of a tycoon and ex-policeman who were sentenced to death for the killing of a Lebanese pop singer.

Susanne Tamim's body was found stabbed, with her throat slit, in her apartment in Dubai in July 2008.

In a case that captivated Egypt and the region because of the fame of the victim and defendants, the men were eventually found guilty and given the death penalty under Egyptian law.

But nearly eight months after the trial, the country's Supreme Constitutional Court has ordered the retrial of two on procedural grounds. Lawyers for the defendants claimed the prosecution's evidence could have been fabricated or tampered with by authorities in Dubai and should not be used against them.

Observers told CNN that "such decision was not a surprise because when the court agrees to re-consider its death sentence decision, you can read between the lines that it is not final."

Moustafa and el Shukkri did not attend the hearing on Thursday, but their family members present in the courtroom openly expressed their joy in the ruling by clapping and chanting.

During the trial, Moustafa's lawyer told CNN his client loved the singer but could not take Tamim as a second wife because his family objected.

Polygamy is legal in Egypt, and it's not unusual for men such as Moustafa, a married father of three, to take on additional wives.

Prosecutors argued that Tamim's death was a "means of taking revenge" but have not elaborated.

Although Tamim was killed in the United Arab Emirates, the Egyptian judiciary tried the case in Cairo because the accused were arrested in Egypt. After Moustafa's arrest in September, Egyptian authorities indicted him, stripped him of his parliamentary immunity and jailed him pending trial.

He also resigned as chairman of Talaat Moustafa Group -- a conglomerate with construction and real estate arms that was founded by his father, Talaat Moustafa. Moustafa's brother, Tarek Talaat Moustafa, now chairs the company.

CNN's Caroline Faraj in Dubai contributed to this report.