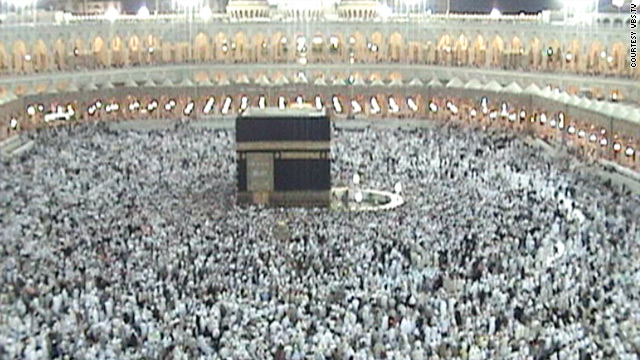 Brooklyn, New York (VBS.TV) -- Based on the sheer volume of bodies, Hajj should not work. As the world's largest pilgrimage and one of the Five Pillars of Islam, each year about 3 million people cram themselves into the relatively small holy city of Mecca, Saudi Arabia, to offer up this, the holiest of Islamic rites. In late 2008, I accompanied my parents on Hajj and managed to sneak a VBS video camera past state security and capture the trip as we saw it. The scene was insane, beyond what I could have ever imagined.

Over a four-day period, Mecca's population is more than doubled, with legions of devout Muslims making their way shoulder to shoulder through the dozen rituals that comprise Hajj. If it weren't for the solemn and religious underpinnings, it would be an unnerving assembly of human beings for such a concentrated space -- like what Woodstock might have been, but less annoying and without the hippies, drugs, and Carlos Santana.

Many Hajj rites have been dramatized in movies and elsewhere, but it is essentially a highly choreographed succession of religious tasks: circling the Ka'bah at the center of Masjid Al-Haram (the Grand Mosque), Sa`I (pacing between two holy sites), the famous Stoning of the Devil, loads of deep prayer and meditation. The point is to purge believers of sins and free them for the next chapter in their lives. It is required that each Muslim of means make the trip at least once.

Given the number of pilgrims and the extremely short span of time Hajj covers, it is virtually impossible to make the journey without the help of a tour group. There are dozens of agencies available to help usher visitors through the masses and ensure that all the requisite rituals are met.

But even with their guidance, completing all the tasks, navigating the various holy sites, and sticking to the hurried itinerary is extremely challenging. Compound the situation with several million people of every economic class and comfort from 100-plus countries across the globe -- many lined up asleep on the side of the road, praying on hilltops, and making their way to and from holy sites -- and it's no surprise that some pilgrims can't complete all the rituals.

But despite this monumental challenge, the bottom line was that doing the Hajj was amazing. It took us to another plane of existence, it forced a detachment from our lives, and it was unlike anything I've ever experienced.