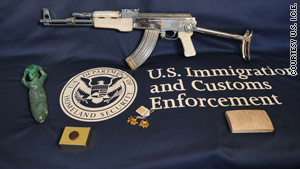 The United States returned ancient artifacts and other treasures to Iraq in a ceremony on Thursday.

Washington (CNN) -- The United States gave Iraq a bit of its long history back Thursday in the form of ancient golden earrings, an old Roman coin, a rifle emblazoned with Saddam Hussein's image and more.

U.S. Immigration and Customs Enforcement Assistant Secretary John Morton gave the cultural items to Samir Sumaidaie, Iraq's ambassador to the United States, in a ceremony at the Iraqi Embassy. It was the latest in a series of returns of more than 1,000 cultural artifacts.

"It is a great privilege and honor, on behalf of the United States, to return to the people of Iraq a collection of cultural treasures that reflects their nation's rich history and heritage," Morton said.

"These are precisely the types of treasures that ICE's Cultural Property, Art and Antiquities unit was established to identify, investigate and return to their rightful owners," he said. "We will continue to be vigilant about finding and prosecuting those who would rob a nation for personal gain."

Sumaidaie thanked the agency "for their continuing efforts to seize and return these cultural heirlooms to Iraq."

"We have a long and rich history in Iraq, one which unites all Iraqis, regardless of ethnic or religious differences. The preservation of our Iraqi heritage should be the concern of all nations because it is an important part of world heritage," he said.

Immigration and Customs Enforcement listed details about each item:

• Neo-Assyrian gold earrings, circa 8th-7th century B.C., from a hoard of gold jewelry known as the Treasures of Nimrud. They were discovered in 1988 in a cache under the floor of the Royal Palace of King Ashur-Nasir-Pal II at Nimrud, taken from the excavation site and eventually smuggled out of the country. ICE seized them from Christie's auction house in New York, which had been offering the earrings in an ancient jewelry sale on December 9. The estimated sale price was $45,000 to $65,000. No charges have been filed against the seller or the auction house, an ICE spokeswoman said.

• A Roman coin from A.D. 248-250, when the Romans occupied the region. The coin had been left at the Houston Museum of Natural Science by a man who said he was a contractor in Iraq. The museum's curator of anthropology alerted federal authorities.

• An AK-47 with Saddam Hussein's image, an example of a special firearm handed out by Hussein to members and backers of his ruling Baath Party. The weapon was recovered in the spring of 2007 during operations in Baghdad.

"A former colonel authorized the transport of the AK-47 from Iraq to Fort Lewis [in Washington state] to be placed in the Fort Lewis Museum as a war trophy. The item was seized by ICE in cooperation with ... the U.S. Army at the behest of the Iraqi government," the agency said in a news release.

• A Babylonian clay foundation cone, circa 2100 B.C., that would have been embedded in a temple's foundation. The Sumerian inscription commemorates the rebuilding of Eninnu, the temple of Girsu's city god, Ningirsu. It was intercepted coming into Chicago, Illinois.

• A Sumerian bronze foundation cone and a stone tablet with inscriptions on both, circa 2500 B.C. to 1800 B.C. A dealer in London shipped the items to a Connecticut-based collector, and they were imported via Federal Express to the Newark, New Jersey, international airport. The items were declared as coming from Syria, but scholars determined they were of Iraqi origin.

ICE's Cultural Property, Art and Antiquities unit and its Office of International Affairs work to investigate illicit imports and trafficking of cultural property, the agency said.

"Working with experts in the field of cultural heritage, art and archeology, ICE authenticates the items, determines their true ownership and returns them to their rightful owners," the agency said. People involved in illegal trafficking can be sentenced to up to 20 years in jail.