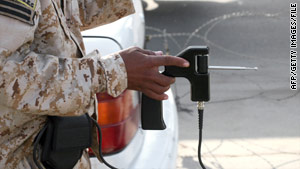 Baghdad, Iraq (CNN) -- The Iraqi government accused a manufacturer of supplying the country with some fake bomb detectors and said Tuesday it plans to sue the company.

However, government spokesman Ali al-Dabbagh said that three Iraqi investigations into the devices determined most of the bomb detectors are working, although some are fake and ineffective. He did not name the detectors in his statement or explain the investigations.

The alleged fakes have been removed from Iraqi streets and have been replaced by functioning ones, al-Dabbagh said. It was not immediately clear how many of such devices were replaced.

Those involved in contracting or importing those devices will be investigated, he said, and the government will sue the manufacturing company. He did not name the firm.

Earlier this year, the Iraqi government announced it would investigate the ADE651 after concerns surfaced the device was a hoax.

The handheld device is commonly used at checkpoints in Iraq and Afghanistan to detect explosives.

The British government has banned the ADE651, made by British firm ATSC, from being exported.

The company declined to comment to CNN earlier this month, citing ongoing legal action. There was no immediate response to Iraq's announcement Tuesday.

The firm's Web site said it was under repair, and no one answered calls Tuesday to a phone number listed for the company.

Also this month, the Thai government said a similar device, the GT200, failed rigorous tests carried out by scientists and the army in Thailand. The government said it was looking into the possibility of legal action against its manufacturer.

The device's manufacturer, Britain-based Global Technical, disputed the tests' results. It said the results were "completely at odds with other tests carried out by independent bodies" and with "the experience of the large number of users of this product all over the world."

Both the ADE651 and GT200 use technology that some scientists dismiss as little more than a car antenna mounted on a plastic box designed to act much the way a dowsing rod is used to find water.