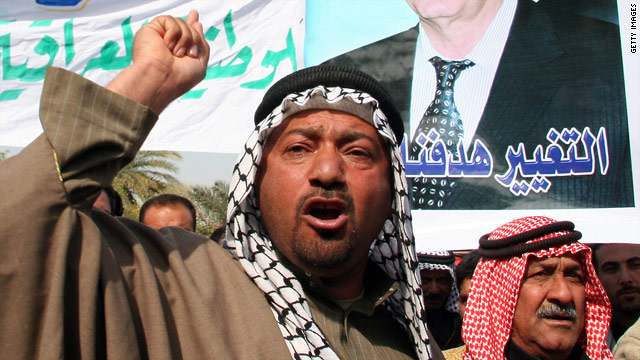 An Iraqi man chants slogans at a rally in support of Saleh al-Mutlaq in Baghdad.
STORY HIGHLIGHTS

Baghdad, Iraq (CNN) -- A key Sunni Arab party is boycotting Iraq's March 7 elections because of what it says was Iranian influence that led to the banning of participants in the upcoming race, including the bloc's leader.

The Iraqi Front for National Dialogue, headed by Saleh al-Mutlaq, said the move was prompted by remarks by a U.S. general and the American ambassador to Iraq about Iran's influence in Iraq's electoral process.

It is seen a setback for efforts to foster reconciliation between Iraq's Sunni Arabs, Shiites, Kurds and other groups.

Al-Mutlaq, a prominent Sunni Arab politician, was one of several candidates -- both Sunnis and Shiites -- banned by the Justice and Accountability Commission because of alleged ties to Saddam Hussein's outlawed Baathist Party.

"We can not go along with a political process run by a foreign agenda. Therefore, the leadership of the Iraqi Front for National Dialogue and its members have decided to boycott the next elections," said Haider Al-Mulla, the front's spokesman.

"There is an obvious Iranian will that made critical and political decisions within the political process in the last few weeks."

He said both men have had meeting in Iran with an associate of an Islamic Revolutionary Guard Corps' Quds Force commander.

"We believe they're absolutely involved in influencing the outcome of the election. And it's concerning that they've been able to do that over time," he said.

Hill also said the men are under the influence of Iran.

Al-Mutlaq's group, part of the Iraqiya coalition headed by former Prime Minister Ayad Allawi, is urging others to boycott the election.

In a recent CNN interview, al-Mutlaq slammed Chalabi for keeping him out of the race and said democracy in Iraq is "finished."